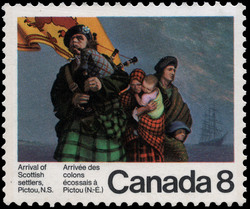 A forbidding shoreline greeted almost 200 Highland Scots on board the "Hector" the day she cast anchor off the shore of what is now Pictou County, Nova Scotia. The dense forest grew down to the water's edge as far as the eye could see. The unfamiliar customs and appearance of the Indians inhabiting the area so terrified the settlers that they remained on board for two days despite their desire to walk again on dry land. Finally, on September 17, 1773, dressed in full Scottish regalia, with al pageantry of their kilts and the pipes, they went ashore. In 1765 the British Government had approved a large land grant in the area of Pictou County to a group of men from Philadelphia. It was on this land that the 200 Highlanders who arrived on the "Hector" settled. Many of the poor crofters came on board with only the rags on their backs and hopes for a better future in their hearts. Promises of free passage and a year's provisions, combined with the prospect of owning good land, were sufficient enticement. Ten passengers boarded at Greenock, the remaining 179 at Loch Broom. Just before setting sail, a stowaway piper was discovered. The captain ordered him ashore, but the passengers begged that he be allowed to remain and offered to share their provisions with him. The wisdom of the captain's acquiescence was proven when the piper's music eased the anguish of the wretched crossing. The "Hector" pioneers faced extreme difficulties during their first year in the New World, but with the development of a lively timber trade with Scotland and the finalizing of land grants, conditions improved and the development of what is now Pictou County was under way. The land was rich, the rivers and oceans plentifully stocked with fish, and the timber of high quality. Prior to 1773 there had already arrived in Canada people of Scottish nationality, but most had come as tenants. The "Hector" brought the first large group to emigrate voluntarily, under no compulsion to settle on specific sites. They were the vanguard of a flood of Scottish immigration which reached torrential proportions around 1800. By then, Scots had settled in the whole of Northeastern Nova Scotia, large parts of Prince Edward Island and New Brunswick, and sections of Eastern Ontario. History confirms that the "Hector" provided the impetus for this tide of immigration.