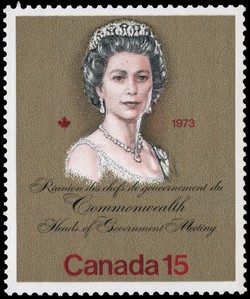 The Canada Post Office will be issuing two commemorative stamps in recognition of the visit in the National Capital from July 31 to August 3 of Her Majesty Queen Elizabeth II and His Highness the Duke of Edinburgh, and of the Commonwealth Heads of Government Meeting in Ottawa August 2 - 10, 1973. All Commonwealth countries accept Queen Elizabeth II as the symbol of the free association of the independent member nations and as such the Head of the Commonwealth. No substantive functions are attached to the title of Head of the Commonwealth and it has not strict constitutional significance but, as the symbolic link uniting all the members of the Commonwealth, it is the outward and visible mark of the special relationship which exists between them. Commonwealth Heads of Government Meeting take place at intervals of about two years in the capital of a member country at the latter's invitation. They give Heads of Government the opportunity to engage in informal and frank discussions on matters of common interest to all Commonwealth members. Most meetings have taken place in London, where the Commonwealth Secretariat was set up in 1965. However, this year's meeting in Ottawa will be the third one to be held away from London, the other two having taken place in Lagos (1966) and Singapore (1971). It will be the first meeting in which Her Majesty the Queen had participated away from London. New procedures proposed by Canada at the Singapore meeting and further developed by the Commonwealth Senior Officials Meeting in Ottawa in October, 1972, will be introduced in order to restore the intimacy of these meeting and to permit these extraordinary gatherings of Commonwealth Heads of Government to function to their full potential. As stated in the Declaration of Commonwealth Principles, "The Commonwealth of Nations is a voluntary association of independent sovereign states, each responsible for its own policies, consulting and co-operating in the common interests of their peoples and in the promotion of international understanding and world peace". The Commonwealth comprises 32 independent member countries, covers roughly one fifth of the world's land area and contains about a quarter of the world's population. Fifteen member countries are monarchies and seventeen are republics. The portrait of Her Majesty the Queen is taken from a photograph by the English photographer Anthony Buckley.