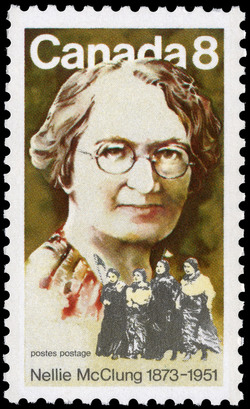 If there was one national voice of the Canadian feminist movement during the first quarter of this century, that voice would be Nellie McClung's. Her activism was only one aspect of the social ferment of those years and must be understood in that context. A prominent campaigner for female suffrage, temperance, urban renewal and social welfare, her slogan was "Never retract, never explain, never apologize - get the thing done and let them howl". She was also a prolific writer. Her fourth book, "In Times Like These", is considered by many critics the finest piece of feminist writing Canada has yet produced. The two volumes of her autobiography, "Clearing in the West" and "The Stream Runs Fast" are interesting both as autobiography and as a social study of her times. Nellie Letitia Moodie was born on October 20, 1873 on her father's farm in Grey County, Ontario. When she was seven, the family moved to Manitoba. There, in 1896, she married Robert Wesley McClung. They lived in Manitoba until 1914, then moved to Alberta. Mrs. McClung died in Victoria, B.C. on September 1, 1951. In 1912 Mrs. McClung joined in organizing the Winnipeg Political Equality League, one of the Country's most successful suffrage organizations. Created primarily to fight the miserable conditions under which women factory workers toiled, it expanded into other areas of particular concern to women, especially female suffrage. Manitoba became, in January 1916, the first province to grant full suffrage to its women. To Nellie McClung and Judge Emily Murphy, Canada's first woman magistrate, belong the credit for establishing that "women" are "persons" in the laws of the British Empire. After several years of court proceedings and appeals, the Privy Council declared in October 1929 that women are, in fact, persons, and can therefore be appointed to the Senate, a privilege previously denied them. Mrs. McClung won position and honours never previously matched by any Canadian woman. She was the first Canadian woman to attend as a delegate an international ecumenical conference of the Methodist Church. Her support of the war effort was rewarded by an appointment to the Canadian War Conference in 1918 and she was an Albertan MLA from 1921 until 1926. Her interest in Canadian culture and her internationalist sympathies resulted in her being the first woman member of the Canadian Broadcasting Corporation's Board of Governors and a Canadian representative to the League of Nations.