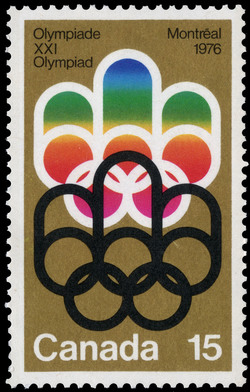 In 1976 scores of athletes from more than 120 countries will converge on Montreal to compete in the renowned cultural and sporting spectacles, the Olympic Games. Initiated in Greece, the first recorded games were held in 776 B.C. They were terminated by a decree of Emperor Theodosius in 394 A.D. but were revived, largely by the efforts of Baron Pierre de Coubertin, in 1896. Since then the Olympics have been held once each olympiad or four year interval. Canada has been admirably represented since 1900. Despite the Olympic's interrupted history the spirit the Greek games has persisted into the modern era. This spirit, the intrinsic beauty of mind and body, is captured in the International Olympic Committee's motto "Citius-Altius-Fortius", "Swifter-Higher-Stronger", and in the words forming the basis of the Olympic creed and attributed to Coubertin: "The important thing in the Olympic Games is not winning, but taking part. The essential thing in life is not conquering but fighting well." The specially designed Montreal logo features five interlaced rings crowned with a symbolic "m". The foundation evokes the pervading olympic spirit of universal brotherhood while the "m" signifies the three tiered winners' podium symbolizing the glory of the winner and the chivalrous spirit of a well contested victory. If one takes the "m" to represent Montreal he is also aware of the honour which the International Olympic Committee's choice has bestowed on the host city and country. In another interpretation at the center of the logo one can discern the track of the Olympic stadium where spectator and competitor are united in the spirit of the games. In Montreal, our largest metropolitan center, Canadians will have a unique opportunity to take part in preserving the essence of the Olympic spirit. In addition to the sports activities there will be exhibitions of national and international import in traditional categories such as architecture, literature, music, painting, sculpture, photography, sport, philately and performing arts. To remind Canadians of the significance of this approaching event the Canada Post Office is issuing on 20 September the first of a series of Olympic commemorative stamps. It is noteworthy that the issue date coincides with the opening day of the British North America Philatelic Society meeting in Calgary as both the design and purpose of this stamp promise to make it of interest to philatelists and all Canadian citizens alike.