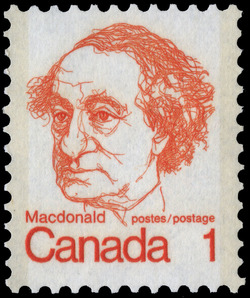 Canada's new set of low value definitive postage stamps features Her Majesty Queen Elizabeth II on the 8¢ value and gives recognition to our historical heritage through the portrayal of six former prime ministers on the 1¢ to 6¢ values. Depending on the period in which they lived, the six former prime ministers honoured in this series played important roles in creating, consolidating or unifying the Canadian Confederation. Sir John A. Macdonald was a major formative influence in the union of the original four provinces and the first prime minister of the Dominion of Canada. His declared preference was for a strong national federation rather than a weak decentralized union of powerful provinces, and he sought at all times, through the division of legislative powers and the organization of the new federal institutions, to ensure the primacy of the new Dominion. During his two terms as prime minister, 1867-1873 and 1878-1891, he worked also for territorial expansion and international recognition for the new country. The seven pen and ink line drawing character sketches in this series are the work of David Annesley.