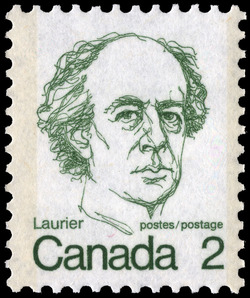 Canada's new set of low value definitive postage stamps features Her Majesty Queen Elizabeth II on the 8¢ value and gives recognition to our historical heritage through the portrayal of six former prime ministers on the 1¢ to 6¢ values. Depending on the period in which they lived, the six former prime ministers honoured in this series played important roles in creating, consolidating or unifying the Canadian Confederation. On the crucial issue of English-French relations Sir Wilfrid Laurier, prime minister from 1896 to 1911, saw the fundamental necessity of building up an egalitarian bi-racial political party. Laurier's greatest achievement lay, perhaps, in the direction his leadership of the Canadian Government helped give to the development of the British Columbia. By thwarting all schemes for turning the Empire into a closely integrated political or economic unit, the colonies gained the time needed to grow to national maturity and the Empire developed into the loose association of nation-states we know as the Commonwealth. The seven pen and ink line drawing character sketches in this series are the work of David Annesley.