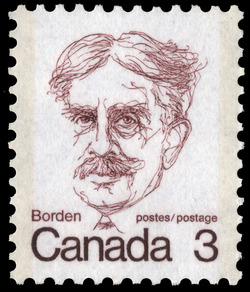 Canada's new set of low value definitive postage stamps features Her Majesty Queen Elizabeth II on the 8¢ value and gives recognition to our historical heritage through the portrayal of six former prime ministers on the 1¢ to 6¢ values. Depending on the period in which they lived, the six former prime ministers honoured in this series played important roles in creating, consolidating or unifying the Canadian Confederation. Sir Robert Borden, prime minister during the First World War, was an outstanding proponent of Canada's right to be heard as an independent nation in the councils of the world. He brought to his life-work a high sens of duty, a capacity for unremitting hard work and a wide and statesmanlike view of Canada's capacities and future. Borden conceived of Canada as a mature nation playing an appropriate part in the troubled international politics of the twentieth century. He sought to make Canadians realize and accept their new international responsibilities. The seven pen and ink line drawing character sketches in this series are the work of David Annesley.