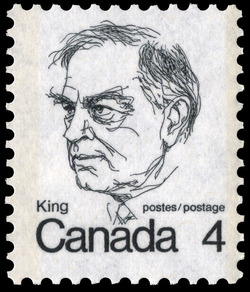 Canada's new set of low value definitive postage stamps features Her Majesty Queen Elizabeth II on the 8¢ value and gives recognition to our historical heritage through the portrayal of six former prime ministers on the 1¢ to 6¢ values. Depending on the period in which they lived, the six former prime ministers honoured in this series played important roles in creating, consolidating or unifying the Canadian Confederation. William Lyon Mackenzie King seemed to sense intuitively what would be acceptable to the majority of Canadians. During his three terms in office (1921-26, 1926-30 and 1935-48), his fundamental policy, like Macdonald and Laurier, was maintaining a political party within which English and French could work together harmoniously. King initiated with Great Britain negotiations which led to the passing of the Statute of Westminster. This statute formally gave to the Canadian Parliament the right to pass and enact legislation. In 1947 he was admitted to the Order of Merit, the first Canadian to receive this honour. The seven pen and ink line drawing character sketches in this series are the work of David Annesley.