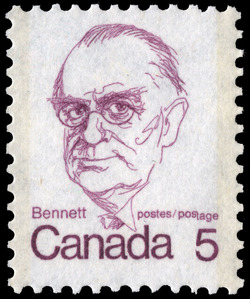 Canada's new set of low value definitive postage stamps features Her Majesty Queen Elizabeth II on the 8¢ value and gives recognition to our historical heritage through the portrayal of six former prime ministers on the 1¢ to 6¢ values. Depending on the period in which they lived, the six former prime ministers honoured in this series played important roles in creating, consolidating or unifying the Canadian Confederation. Richard Bedford Bennett, who became prime minister early in the Depression on a platform based on Imperial preference and unemployment relief, served from 1930 to 1935. In 1934, however, he became convinced that tariff changes and direct relief could not end the Depression and announced that the days of laissez-faire were over and that the state must take an increasing part in the control of economic life. Bennett completed the work begun by King by setting the amended terms of the Statute of Westminster. His government also initiated negotiations with the United States for the construction of the St. Lawrence Seaway. The seven pen and ink line drawing character sketches in this series are the work of David Annesley.