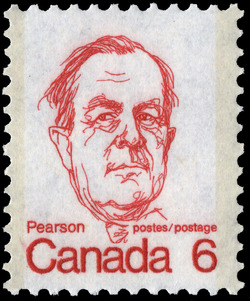 Canada's new set of low value definitive postage stamps features Her Majesty Queen Elizabeth II on the 8¢ value and gives recognition to our historical heritage through the portrayal of six former prime ministers on the 1¢ to 6¢ values. Depending on the period in which they lived, the six former prime ministers honoured in this series played important roles in creating, consolidating or unifying the Canadian Confederation. Lester Bowles Pearson is remembered and honoured for the work he did to advance Canadian unity. It was his government that gave Canada its first distinctive flag. In the many important positions he held in national and international organizations, for examples as president of the 7th General Assembly of the United Nations, he showed his remarkable talent for finding a formula for the conciliation of opposing interests. This talent and his powers of persuasion made him one of the great negotiators of his time and resulted in his being awarded the Noble Peace Prize. Pearson was prime minister from 1963 until 1968. The seven pen and ink line drawing character sketches in this series are the work of David Annesley.