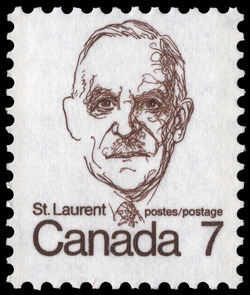 The hidden date for this stamp can be found near the tie of Saint Laurent. The Right Honourable Louis Stephen St. Laurent served as the Prime Minister of Canada from November 15, 1948 to June 21, 1957. An eloquent spokesman for Canadian unity, St. Laurent, a gentleman of politics, was affectionately known as "Uncle Louis" by the Canadian people. Born in 1882 in the small rural community of Compton in Québec's Eastern Townships, Louis St. Laurent grew up in a bilingual and bicultural milieu. His father was a French Canadian general merchant and his mother, a school teacher before her marriage, came from English Canadian background. The young Louis St. Laurent was an ardent and excellent scholar. His academic achievements culminated with his graduation from Laval University with a degree in law in 1905. Louis St. Laurent's career in law was a distinguished one. Brilliant and capable, he gained the respect of his colleagues and served two terms (1930-32) as President of the Canadian Bar Association. It was St. Laurent's profound sense of duty to his country which drew him out of private life and into politics in 1941. Canada was at war, and although reluctant to do so, St. Laurent, at the request of Prime Minister William Lyon Mackenzie King, accepted the position of Minister of Justice. During the war years, he devoted himself to Canada's well-being and especially to the cause of national unity. The war over, St. Laurent turned to the international scene and, in 1946, he was appointed Secretary of State for External Affaires. A strong supporter of the newly founded United Nations, he led the Canadian delegation to the first sessions of the General Assembly in London and New York. He was also very active in the formation of the North Atlantic Treaty Organization. In August of 1948, Louis St. Laurent became the leader of the Liberal party and, in November, the Prime Minister of Canada. His chief objectives were clear: to strengthen national unity and to widen Canada's role in international affairs. Under the leadership of St. Laurent, the original plans for the Union of British North America were finally fulfilled. On April 1, 1949 Newfoundland entered into Confederation as the tenth Canadian province. It was the St. Laurent government which finalized the changes in the British North America Act that empowered the Canadian parliament to amend the Canadian constitution on federal matters and made the Supreme Court of Canada the court of final appeal. During the St. Laurent years, Canada enjoyed unprecedented prosperity and industrial growth. The St. Lawrence Seaway, the Trans-Canada Highway and the Trans-Canada Pipeline were among the many development projects of his government. Perhaps Louis St. Laurent's greatest achievement, however, was in giving Canadians confidence in Canada. A man of international stature, he guided the nation with a sure, firm hand and under the leadership of "Uncle Louis" Canadians felt secure. Even during the bitter pipeline debates of 1956, while support for his party was decreasing, Louis St. Laurent remained popular and well respected. The Liberal government of Louis St. Laurent held power until 1957. In 1958 St. Laurent retired from politics and returned to private life in Québec City. Even in retirement, he remained the respected elder statesman. This courteous, dignified and humane man continued to retain the esteem and affection of Canadians. Louis Stephen St. Laurent died in July 1973. He was 91. The postage stamp issued in honour of Louis St. Laurent is in the series of the new low value definitives. The pen and ink line drawing of St. Laurent is the work of David Annesley, designer for the series.