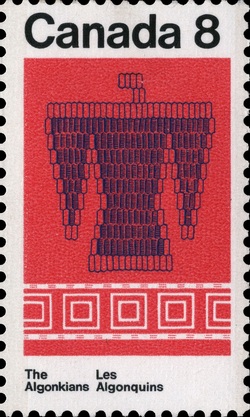 Algonkian is a family of related languages spoken over a wide area of Canada. When Europeans first arrived on the shores of this continent, Algonkian-speaking people occupied the whole Nova Scotia, New Brunswick and Prince Edward Island, most of Quebec, northern Ontario and parts of the Prairies. The Algonkian tribes populating these great eastern woodlands were the Ojibwa, Cree, Algonquin, Montagnais, Micmac and Malecite. The two stamps in this issue, the second pair in a set of four honouring the Algonkian Indians, focus on Algonkian costume and graphic symbolism. All the Algonkian Indians wore clothing made of hides and furs. The men dressed in leggings, garters, breach-clout, belt, shirt and some form of head gear. Women wore leggings and wrap-around skirts. Both sexes had fur robes and soft-soled moccasins. Shirts and leggings were usually made of deer skins. A woven cloth was made from bison hair and was sometimes dyed black, yellow or deep red. Before the arrival of the white man, the clothing was decorated with painted designs, dyed porcupine quills or moose hair embroidery. The thunderbird illustrated in the graphic symbolism design was done in porcupine quill embroidery while the decorative pattern was taken from an Algonquin belt. To the Algonkian Indians, religious beliefs were important as they were involved in the quest for survival, curing the sick, foreseeing the future, interpersonal relationships and the dead. The rituals were carried out by shamans who possessed supernatural powers derived from the spirit world. The Indians believed that spiritual power existed in the sun, fire, the sea, the cardinal points of the compass, rocks, plants and animals, so the spirit beings were numerous. The thunderbird was, for example, one of the more powerful spirits, along with the bear spirit. All the Algonkian Indian tribes lived by a combination of hunting, fishing, gathering and agriculture. Crops grown included corn, beans and squash. For part of the years the Indians were relatively sedentary, therefore, their birch bark wigwams could be carefully constructed and they could own a variety of household furnishings such as dishes, utensils, containers, tools, religious items and games. The painting for the design illustrating Algonkian costume is the work of Lewis Parker of Toronto. Georges Beaupré of Montreal did the typography for the whole series. He also designed the graphic symbolism stamp.