The Inside of a House in Nootka Sound 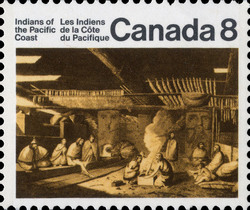 The west coast of Canada, although mountainous and a rigorous area for habitation by man, was densely populated in aboriginal times. Living in this region were the Indians of the Pacific Coast: Tlingit, Haida, Tsimshian, Bella Coola, Kwakiutl, Nootka and Salish. A mild climate and heavy rainfall combined to produce dense vegetation in the area. Conifer forests extended from the shoreline almost to the mountain tops with individual trees growing to tremendous heights. Wildlife was plentiful. Fish - salmon, halibut, cod, herring, smelt and eulachon - were abundant. Land game consisted of deer, bear, mountain goat and sheep, wolves, and other small mammals. The seacoast environment of the Pacific Coast Indians was rich in resources but difficult to exploit. Hunting by land was hampered by the rugged terrain and dense vegetation. Fishing and hunting of sea mammals, such as the whale, were non profitable. Salmon, the principal catch, was taken in spring and early summer and preserved for winter use by smoking and drying. Sufficient food secured from the rivers and sea during spring and summer to last the rest of the year allowed the Pacific Coast Indians much leisure time. With a way of like oriented to the sea, the Pacific Coast Indians settled year round in villages at the heads of sheltered bays. Villages consisted of several multi-family plank houses facing the sea. Characteristically, a round to oval doorway was cut through an elaborately carved and painted totem pole placed just outside the front of the house. The resources of the forest were not overlooked by the Pacific Coast Indians. Woodworking was extremely important and showed great carftsmanship. Ornamentation was achieved through carving in relief and painting. The totem pole and dugout canoe are well-known examples of the woodworking skill of the Pacific Coast Indians. Although woodworking was highly developed, basket making and weaving were also skillfully done. The print "The Inside of a House of Nootka Sound", reproduced courtesy of the Public Archives of Canada, is an engraving by W. Sharp taken from a drawing by J. Webber done during Captain James Cook's exploration voyage of the Pacific Coast in 1778. The artifacts were photographed by Ray Webber through the co-operation of the Royal Ontario Museum and the National Museum of Man. They are, from left to right, a Haida box, a Nootka whale-bone club, a Haida halibut hook, a Haida moon mask, a Salish blanket, a wood carving of a salmon, a Haida basket and a Tsimshian basket. Typography is by Georges Beaupré. Responding to the many continuing requests from collectors, the practice of engraving a minuscule date in the design - the "hidden date" - is reinstalled with this first new issue fo 1974 and will be continued. It will be comprised of the (C) symbol, indicating the Canada Post Office registration of copyright of the stamp design, and the year of issue of the stamp.

John Webber, "The Inside of a House in Nootka Sound", 1780-1784 Library and Archives Canada, Ottawa, Ontario