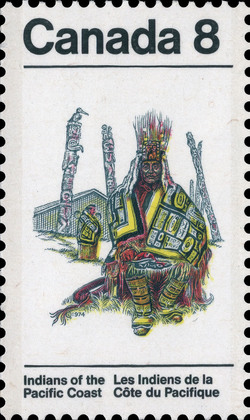 Living on a narrow strip of land with an immense ocean to the west and towering mountains to the east, the Indians of the Pacific Coast developed a unique civilization. The Pacific Coast Indians lived in villages whose inhabitants were usually closely related. Occasionally, several clans lived in one settlement. Each clan owned, in addition to material possessions, a section of land, fishing stations and certain privileges - the right to use certain names, to display certain heraldic crests, and to perform certain songs, dances and other rituals. The members of a clan were divided into nobles and commoners. There were also slaves who were simply chattels and not regarded as members of the clan. Born as either a noble or commoner, each individual inherited a unique position in graded scale from the highest noble, the chief, to the lowest commoner. A person's name and crest were indicative of his rank in the social hierarchy. The wealth possessed by the clans was owned and shared by the group but controlled by the chief. Each noble held nominal title to certain material possessions and privileges. Privileges, such as the right to perform a certain dance, were inherited or granted by the chief to a noble who could pass them to one of his descendants. Material wealth was distributed through an elaborate ceremonial feast, known as the potlatch. When a potlatch was held by a chief and his clan, another village was invited and numerous gifts were given to the guests. The potlatch, overtly held to announce an event of social significance, such as the proclamation of a new chief, was used to display the wealth of the clan, to demonstrate prosperity and power, and thus to enhance the clan's prestige. During these ceremonies, which might last for many days, the nobles would perform the songs and dances to which they held title. Supernatural being who inhabited the forests, the waters and the nearer reaches of the skies greatly influenced the Pacific Coast Indians. These were the gods with whom they might come in contact to their benefit or disaster. Animal spirits, especially the salmon on whom their way of life depended, were important to the Indians. They believed that the salmon spirits inhabited a house under the sea, similar to their plank houses, where the fish assumed human form. When the annual run of salmon was due, the spirits assumed the form of salmon and returned. The salmon had to be treated with respect or they might be offended and not return the following year. For example, all salmon bones had to be return to the river to be washed downstream to the sea and to the salmon house. Another important ritual connected with the arrival of the salmon was the "First Salmon Rite" where the first salmon caught was ritually cooked and distributed among the villagers before permission was given to begin fishing. The design for the Pacific Coast Indians ceremonial dress, a painting of a Gitskan Tsimshian chief wearing a Chilkat blanket at a potlatch, is the work of Lewis Parker. The design for graphic symbolism, a thunderbird from a painting on a Kwakiutl house-front and a Salish decorative pattern signifying clouds over mountains, is by Georges Beaupré, who is also responsible for the typography for both stamps. Incorporated in the designs of this stamp issue is the symbol (C), indicating Canada Post Office registration of copyright of the stamp design, followed by a minuscule date, indicating the year of issue. This "hidden date" inscription was reinstated in the first stamp issue of 1974 and will continue.