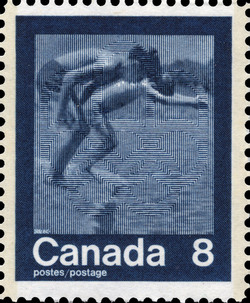 The second issue of Canada's Olympic stamps, anticipating the 1976 Montreal summer games, reflects the enjoyment and the reward of participation in physical exercise, which inspire the magnificent achievements of athletes in world competition and which are shared the world over by people of all ages and circumstances. Even while the very accomplished athletes of all countries pursue their rigorous programmes in preparation for the games, children, youths, adults and family groups are being attracted to physical pastimes. These recreational activities generally reflect something of the land, the seasons, and the people. Canada, in summer, is represented typically by the subjects of the four designs which are featured on this postal issue. Children diving from a dock, symbolize water activities, the summer sport enjoyed most frequently in Canada. People seek water to sit by, to swin and to fish in, to ski across, to dive into and to float over. The effects of water temperature and buoyancy create a sense of exhilaration. The very young and the handicapped can participate. Canadians are, therefore, fortunate to have been endowed with the world's longest seacoast and hundreds of thousands of lakes, rivers, streams and ponds. Perhaps as a result of this, the nation now has approximately twenty thousands competitive swimmers. Thus water activities, jogging, bicycling and hiking typify a renewed appreciation of the benefits of conditioning, a healthy mind and a healthy body, and these sports demonstrate the wisdom of the Olympic creed "The most important thing... is not to win but to take part...". These new issued are being produced with the latent image technique, a first on stamps in Canada and the world. Viewed straight on, one of the four recreational activities will be seen, but when observed at an oblique angle, the Montreal Olympics symbol will appear. The designs for these stamps were created by Hunter Straker, Templeton Limited. Those of the joggers and the cyclists were derived from photos taken by Mr. Crombie McNeill for Information Canada.