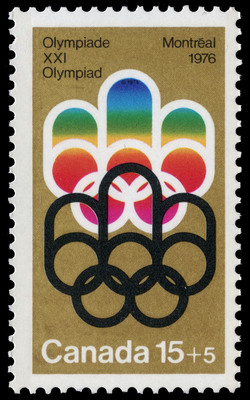 The hidden date for this stamp can be found near the top of the colourful olympic symbol. In little more than two years, world attention will focus on Canada with an intensity seldom equalled; for in Montreal and Kingston, thousands of women and men will be gathered to test their skill, strength, endurance and courage. The 1976 Olympic Summer Games will be under way. Despite their interrupted history, the spirit of the early Greek games has persisted into the modern era. This spirit, the intrinsic beauty of mind and body is captured in the International Olympic Committee's motto, "Citius-Altius-Fortius", "Swifter-Higher-Stronger", and the words of the Olympic creed: "The most important thing in the Olympic Games is not to win but to take part, just as the most important thing in life is not the triumph but the struggle. The essential thing is not to have conquered but to have fought well." The Olympics were revived for a variety of idealistic reasons by the Baron de Coubertin. He wanted to show that national programmes of physical training and competitive sport would build character and create better, happier citizens. He believed that the principles of fair play and sportsmanship would be demonstrated in the Games and that they would stimulate interest in the fine arts. The Baron wished to prove that sports were for fun, not for money. He was convinced that the Olympics would create international goodwill. The specially designed Montreal Olympic emblem features the five interlaced rings crowned with an "m". This foundation represents the five continents and evokes the prevailing Olympic spirit of universal brotherhood, which should be basic to all human endeavour. The "m" signifies the three tiered winners' podium, symbolizing man's perfection as well as the glory of the winner and the chivalrous spirit of a well contested victory. The "m" also represents Montreal and indicates the honour which the International Olympic Committee has bestowed upon the host city and country. At the centre of the emblem one can discern the track of the stadium where spectator and competitor are united in the spirit of the Games. Montreal was caught up in the Olympic spirit even before the work of Baron Pierre de Coubertin began. In the 1840's the city organized its own version of the Games, presided over by the Queen's representative in Canada, the Governor-General. Simplicity and careful planning were in evidence as participants engaged in many of the events, such as the high jump, long jump, triple jump, hammer and discus throws and foot races, which in 1976 will attract the world's greatest athletes. Sports activities, both professional and amateur, have a long tradition in Montreal which over the years, has equipped itself with facilities and resources reflecting its dynamic population. These new stamps are the first semi-postals that have been issued by the Canada Post Office. The purpose of the surcharge is to give the public a convenient opportunity to support the Games on a voluntary and personal basis. Such stamps will serve to publicize the events to take place in Montreal and Kingston in July and August 1976 and will become attractive and inexpensive mementos. Germany, France and Japan, among other countries have, in the past, made use of semi-postals when they hosted the Olympics. The graphic elements used in the present issue are the same as those incorporated in the issue of September 20, 1973, although a stamp with a bronze background has been added to the original two stamps with gold and silver backgrounds. Repetition of the graphic design of one set of stamps in another of a smaller format is rare in Canadian philatelic history. The best known example of this is the "Large Queens" and the "Small Queens" of the nineteenth century.