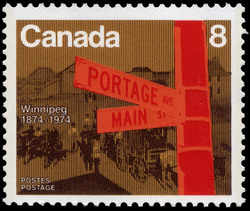 The hidden date for this stamp can be found on the Main ST sign. In 1974 Winnipeggers will be feasting and revelling in honour of their city's centennial. Winnipeg was incorporated as a city in 1873, after a bitter taxation dispute, during which a group of unknown men coated the speaker of the lower house of the Manitoba Legislature with tar. However tranquility was restored by 1874 when the first Council meeting occured and this meeting has shifted the emphasis of subsequent celebrations from 1873 to 1874. The metropolis at the confluence of the Red and Assiniboine Rivers occupies a strategic position. La Vérendrye took account of it in 1737 and established a fur trading post, known as Fort Rouge, there in 1738. The Selkirk colonists arrived in 1812. In the eighteen-sixties independent traders founded, in the vicinity of the Hudson's Bay Company post at Fort Garry, a "rude little village", at first named McDermotstown and later Winnipeg. Frontier conditions did not completely disappear as soon as the town became a city. For awhile it was often difficult to decide what belonged to the city and what to the surrounding countryside. In March 1874 there were complaints that it was unsafe to allow children out of doors because of the number of voracious and starved pigs prowling the streets. Wolves occasionally roamed the outskirts of the city. Fire was a constant hazard among the tightly packed wooden buildings and there was some speculation that if a fire really got going, it would eradicate the entire city. During the rainy season, mud, which has been lovingly described as having been slippery as grease and tenacious as glue, was everywhere. Winnipeg had more than its share of saloons and rowdies and was rated in 1876 as one of the two most evil places in Canada. These difficulties and peccadilloes were not insurmountable barriers to a more stable way of life. Population lept from 100 in 1870 to 5,000 in 1875. The industries necessary to support a burgeoning urban and rural population were quickly added to the traditional pursuit of fur trading. The citizens erected sidewalks, churches, a new jail with thirty-two cells, and a hospital. Cultural life was active. Lectures, such as the delivered by Rev. Wm. Cochrane of Brantford, Ontario, on "Scotland's Hero Martyrs" were always popular and by the winter of 1873, the press could boast that "We have now in Winnipeg sixteen billiard tables, one pigeon hole table and one bowling alley; and there is some talk of another half dozen billiard tables to be established in the spring." But the city's growing sense of permanence was best reflected by the joyful news that, within a single week in November 1873, there were no fewer than eight marriages. Winnipeg has a strong cosmopolitan tradition. First, as a fur trading post centre and later as a railway and financial centre, the city's interests have always been as wide as Canada itself and even wider. A visitor in the early days might have overheard conversations in at least seventeen languages. This cosmopolitanism and ethnic diversity has translated itself into a pride of sophistication justified and reinforced by a symphony orchestra, a ballet company, a professional football team, a professional hockey team, an art gallery, a music festival, two universities and by other examples of cultural dynamism. Commemorating the centennial of a great city, this stamp was designed by Mr. Jack R. MacDonald of Winnipeg and portrays the corner of Portage Avenue and Main Street as it was in 1872. The Manitoba capital was born at this famous intersection which began as the junction of two important Red River trails. On this occasion, a "first" for Canadian postage, embossing has been combined with four-colour offset lithography in the production of these stamps, by Ashton-Potter Limited.

Designed by Jack R. MacDonald Based on a photograph by James Penrose