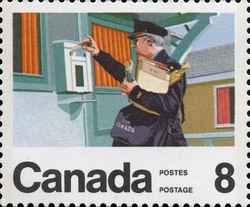 The hidden date for this stamp can be found on the mail that the carrier is holding in his arm.