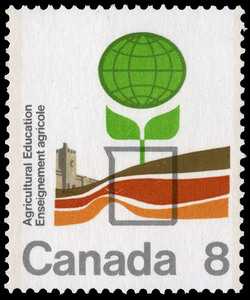 Although the northern physical environment is one of the most difficult in which to farm, Canada's efforts in this field have been so rewarding that they have allowed us to devote resources to other industries, to transform the nation from a rural to an urban society, and to feed not only our own people, but millions throughout the world. Today, agriculture continues to be the segment of the economy in which productivity is increasing fastest. The Canadian agricultural sciences have been largely responsible for these successes. Always in step with and involved in these developments have been the schools of agriculture. This subject was taught in New France but Canada's first school of agriculture in modern times was l'École Supérieure d'Agriculture, established in 1859 at Sainte-Anne-de-la-Pocatière. The Ontario Agricultural College, which is now a part of Guelph University, opened in 1874 and this year is celebrating its one-hundredth anniversary. Originally known as the Ontario School of Agriculture, O.A.C. combined education and research from the beginning. In 1874 the school started the country's first agricultural experimental station. Early research was simple and a restricted adjunct to undergraduate instruction, in keeping with the school's objective of training practical farmers. More recently O.A.C. and institutions like it have not only been carrying out their traditional responsibilities, including the education of those who do research, but they have been conducting disciplinary research in depth. In 1870 Canada acquired the Northwest Territories, which included present day Alberta, Saskatchewan and Manitoba, lands of startling variations in terrain and climate. The experience and traditions of most farmers could not overcome the area's challenges. Therefore, in 1886 the federal government created five experimental farms under the leadership of Professor William Saunders. Information from the experiments was to be published for popular distribution, but in spite of this, suspicion was rampant. One critic felt that the system would be "ten times more costly than profitable" and that a farmer adopting its plans "would be the loser every year." Luckily, this advice was ignored and early in the twentieth century, the research establishment was able to expand quickly in response to a vast new surge of rural settlement. The dividends of agricultural research and education have been stupendous. Scientists have devised sophisticated grading systems which give us an edge on world markets. Better storing and processing techniques have permitted great self-sufficiency in fruit and vegetable production. Canada is in the forefront of the application of remote sensing to crop surveys. There has been a solicitous concern for animals. Indeed, research on the feeding of livestock preceded studies on human nutrition. Most of the crops used here have been developed at national research institutions. These varieties are bred for climatic adaptation, high yields, improved quality and resistance to disease. Wheat rust, for example, bedevilled Western Canada for years. Thatcher wheat, a strain created in Minnesota, for a time kept the menace in check but in the early nineteen-fifties, a new and improved type of rust evolved, race 15B. Fortunately, plant breeders at the Winnipeg Rust Research Laboratory had anticipated this development and had brought into being a wheat called Selkirk. Over a ten year period, farmers who used Selkirk rather than Thatcher saved $386,000,000.00 and it has been estimated that rust research in general saves $185,000,000.00 per year. The scientific approaches which produced these results are now being applied to the managerial, sociological and engineering problems of the farmer. On the occasion of the one-hundredth anniversary of the Ontario Agricultural College, the Post Office plans to issue a stamp honouring agricultural educationalists and scientists. This commemorative was designed by Mary Brett, Patrick Cowley-Brown and Allan McAllister, all of Ottawa.