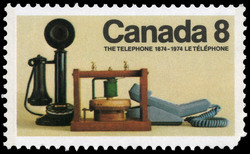 The hidden date for this stamp can be found on the Gallows Frame telephone. At Brantford, one hundred years ago this July, Alexander Graham Bell, a young teacher of the deaf, spent a few weeks of leisurely contemplation and invented the telephone. This occurred while he was trying to perfect a device which would send several telegraphic messages at once along the same wire. The people of Brantford, of course, are proud of what he achieved in their city and have spared no effort to refute claims that his greatest idea was conceived elsewhere. Luckily, Bell settled any possible controversies when he stated that "...it certainly is the case that the telephone was invented in Canada ... Brantford has an indisputable claim to this distinction and is rightfully named 'The Telephone City'." That such disputes should arise is not surprising since Bell and his partners had to fight approximately six hundred lawsuits to prove the originality of his work. In 1874, all the basic principles embodied in the telephone had been known for at least forty years. Bell's contribution and the mark of his genius was to reveal a "hitherto unappreciated" relationship between these principles, which were to be found in the seemingly unrelated fields of physiology, electricity and acoustics. He was fortunate to have had experience in each. On the other hand, invention is a social process and the elements of individual genius and luck must not be allowed to create illusions. Inventors thrive only when they can draw on the work of others, when they have the opportunity to apply "systematic thought" to "a single product or process" and when they live in a community which cherishes the things of the mind. Bell, for example, was the intellectual debtor of many nineteenth century scientists including Hans Oersted, Michael Faraday, John Tyndall, Hermann Helmholtz, J. Baile and a host of others. Bell lived in an environment which allowed him to concentrate for lengthy periods on a specific and not immediately productive task, and which lionized and enriched the successful innovator. Invention was and is an ongoing procedure. Indeed, the telephone had no sooner appeared than Thomas Edison improved it. The telephone was particularly characteristic of the times into which it emerged, a generation of materialism, proud of its material accomplishments and philosophy. It is no exaggeration to say that another industrial revolution took place during this productive generation, especially in the fields of communications and electrical science. The growth of the press, the expansion of railway, postal, submarine cable and steamship services and the invention of the radio as well as that of the telephone increased the speed at which information travelled. Although late nineteenth century men and women never completely understood the phenomenon of electricity, they devised numerous fruitful applications for it, such as the light bulb, the successful dynamo, the induction motor, the radio and once again, the telephone. Bell himself was a reflection of many of his contemporaries. He was an agnostic and his philosophy of nature in the broadest sense, was mechanistic. He wrote that "I catch glimpses of the harmonies of nature, of how one part fits into another like the wheel-work of a complicated machine". Each of the telephones portrayed in Canada's newest postage stamp has a durable place in history. The Gallows Frame was the world's first telephone. Speaking of it in 1915, Bell said that "The instrument, just as you see it here, was invented in the summer of 1874, during a visit I paid to my father and mother in Brantford..." The Pedestal or "Daffodil" model was very popular and is regarded by many as being symbolic of all telephones. The Contempra Phone was the first to be conceived, designed and manufactured entirely in Canada. Ray Webber of Toronto photographed the three devices.