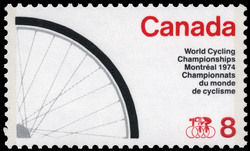 The hidden date for this stamp can be found in the cycling logo. The 1974 World Cycling Championships will be held in Montreal, Canada, from August 14 to 25. For ten action filled days the world's top cyclists, amateur and professional, will compete for the highest honours in cycling, the coveted rainbow sweater, the symbol of world supremacy. The rainbow colours - blue, red, black, yellow, green - may only be worn by world champions. This will be the first time in recent history that the World Cycling Championships, which are usually held in Europe, will occur in North America. The last time the combined amateur and professional championships were held outside Europe was in 1912 when they were held at Newark, New Jersey. In 1968, the amateur events were held in Montevideo, Uruguay. The World Cycling series officially started in 1893 at Chicago. In 1899, World Championships were held in Montreal. In 1974, after an interval of 75 years, Montreal will again become the meeting place of the world's greatest cyclists. Bicycles today are specially designed for competitive cycling. A road racing bicycle weighs approximately 21 pounds, has 10-12 speeds and 2 brakes. A track bike has none of the accessories needed for road racing, no gears or brakes and weighs 16-18 pounds. International cycling tracks are roughly oval in shape, with two straight stretches linked by banked curved end sections. The velodrome for the 1974 World Cycling Championships has a 285 metre track with the slope of the banking varying from 13 degrees to 48 degrees. The World Cycling Championships are open to both amateur (men and women) and professional (men) competitors. It is expected that athletes from some 50 countries will take part in the track and road events. Both amateurs and professionals compete in sprint events. Unlike the running sprinter who relies on an opening burst of speed, the pedalling sprinter is in no hurry when the starter's gun is fired. His chief concern is to be in the right position during the last 200 metre dash to the finish line where a speed of 40-45 miles per hour will be attained. Tandem sprints, where perfect pedalling harmony is the key to victory, are also held. In the individual pursuit event, only two riders are on the track, one starting in the home straight, the other exactly half-way round the track. The aim is to cover the distance in the shorter time, or, to catch up to your opponent and win by a knock-out. Team pursuit events take place with two teams of four riders each starting on opposite sides of the track. Time trial races are also held. The kilometre time trial is a track event where the individual competitor has the track entirely to himself in a test of sustained speed. The 100 kilometre time trial is a road race, where four riders as one team ride one behind another to take advantage of the slipstream effect and maintain an average speed of 30 miles per hour. The demi-fond or motor paced event, where the cyclists ride closely behind high-powered motorbikes, is perhaps one of the more interesting events for the spectator. The motorbike driver sets the pace and the cyclist relies entirely on the driver's judgement in determining the race strategy. The 1974 World Championship road races will take place on Mount Royal, a mountain located in the centre of Montreal. Professional men will compete in a 300 km (187 miles) race, amateur men in a 200 km (125 miles) and amateur women in a 70 km (44 miles) race. Cyclists average a speed of 22 to 27 miles per hour during a road race. The 1974 World Cycling Championships will allow many North Americans the opportunity to observe the fitness, endurance, ability and sportsmanship of the world's top cyclists. The stamp issued to commemorate these championships was designed by Burns & Cooper of Toronto.