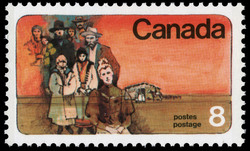 In continuation of its multicultural series, the Post Office will honour the contributions of ethnic groups to the growth of the prairie provinces. To do so now is appropriate since 1974 marks the centenary of the arrival of the Mennonites in Manitoba. The Mennonite religion originated in Switzerland during the Reformation. When the movement spread to the Netherlands, there were intense efforts to stamp it out. Consequently, the Mennonites fled to East Prussia where they had been promised exemption from military service. Eventually, the Prussians became fearful that this might weaken the fighting power of the state. They imposed restrictions which caused many families to leave for Southern Russia. All was well there until 1870 when the Czar embarked on a campaign of Russianization. As the German speaking Mennonites had a tradition of migration to avoid persecution and secularization, they resolved to send delegates to investigate the possibilities of North America. The British Colonial Secretary was the first to inform the Canadian government about the situation in Russia. Ottawa acted swiftly and decisively. It offered to defray the expenses of delegates visiting Canada and to subsidize the travel expenses of the potential newcomers. It granted exemption from military service and the right to religious schools. The government set aside twenty six and one-third townships of free land for the Mennonites and Parliament authorized a loan to them of up to $100,000.00. The Quakers, the Tolstoyans and the Ontario Mennonites also did what they could to make straight the way to Canada. To expedite matters, however, an immigration agent was necessary and the government dispatched Mr. William Hespeler. In those days an immigration agent needed the stealth of a secret agent and the promotional ability of a used car salesman. The Russians, for example, tolerated emigration but severely punished those who furthered it. The local British consul informed Hespeler, when he arrived in Southern Russia that he would soon be in jail. Nothing so drastic happened although the police did confiscate a case of pamphlets. Under these difficult conditions, Canada's agents had to overcome the blandishments of the United States, South Africa, Brazil, Argentina and even Russia and to refute the unpleasant rumours about Canada fabricated and spread by her rivals. In 1874 the Mennonites came to both Canada and the United States. Their delegates had been more satisfied with American soil but Canada had made more concessions. The new Manitobans arrived by way of the Sea of Azov, Odessa, Hamburg, Liverpool and Quebec City. The trip also included a voyage on the Red River. One contingent was shipped up the Red, without shelter "on a barge already laden with railroad iron". Everyone who saw the new settlers was impressed. The Quebec immigration agent noted that "They were of a robust appearance, very mild and temperate, docile and under the thorough control of their leaders. They brought a considerable amount of specie with them, as well as drafts for large amounts ... Their clothing was well adapted for the climate of Manitoba...". The Montreal agent was pleased to see their many children. Once farming began, the Mennonites made rapid progress despite floods, grasshoppers and the fact that these people were among the first non-Indians to live on the open prairie. The new group introduced cellar dwellings, Russian stoves fuelled by grass and dung, agricultural villages, summer following and flax and thus taught Canadians much about prospering in prairie conditions. Of the many large tracts of land set a side for specific groups or companies, the Mennonite reservations were among the few which quickly attracted large numbers of settlers. By 1880 the first Mennonite reserve was full. By the early nineties daughter colonies were growing in what are now Saskatchewan and Alberta. Will Davies of Toronto designed this newest stamp in the multicultural series.