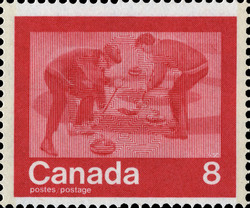 When the cold north wind sweeps down from the polar ice-cap, Canadians know that winter has arrived. Ice and snow are not unwelcome, however, because they herald a new season of activity. To reflect this fact and to draw attention to the upcoming 1976 Montreal Olympic Games, the Post Office has dedicated the remaining stamps in its "Keeping Fit" series to curling, skiing, skating and snowshoeing, physical pastimes typical of Canada in the winter. These are sports which people enjoy from childhood through to old age. The body was built for action and thrives on it. Indeed, individuals who live to one hundred invariably have had a substantial amount of exercise each day. Curling, skiing, skating and snowshoeing are thus so delightful because they provide the body with something it needs. The Olympic Games will have served their purpose well if they convince people that sports have that unusual combination of qualities. They are both beneficial and fun. Even before the reign of Henry VIII, curling had numerous devotees. Naturally, there is a dispute as to where it first appeared, some giving the credit to Holland and others to Scotland, but the game evolved in the latter and became so popular there that a bishop was charged with curling on the Sabbath. The pastime reputedly arrived in this country with the soldiers of General Wolfe and by the winter of l902-3 was such an important part of the national scene that a tour of Canada by a Scottish team was planned in the hope that it would produce "...a notable advance toward Imperial Federation". Politics aside, the heart and soul of curling are courtesy and sociability. Therefore, as much as the highly trained athlete, the millions who curl, skate, ski and snowshoe are keeping the Olympic spirit alive. These people illustrate the "social, educational, aesthetic, ethical and spiritual values of amateur sports" and demonstrate on a day-to-day basis that sport is for fun and enjoyment. The new designs are by Hunter Straker Templeton Limited of Toronto. They based the skiing, skating and snowshoeing stamps on photographs by Malak of Ottawa. These stamps incorporate a new technique in steel engraved printing and design. Viewed normally, the pictorial design (primary image) is clearly seen. However, when viewed obliquely, a second (latent) image appears. Viewed as shown, the horizontal lines and spaces (100 lines per inch) and the ink texture of the engraving process combine to expose the hidden or latent image. Various methods can produce this result. In this set of stamps a line orientation technique is used. The latent image (horizontal lines) is camouflaged by the primary image (vertical lines) when viewed normally.