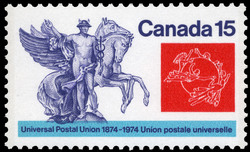 The world postal service is part of the daily life of people everywhere.Its proper running is essential to the life of the international community. Although not widely known to the public at large, the Universal Postal Union, the co-ordinating body for the world's postal administrations, is one of the oldest intergovernmental organizations in existence. The Universal Postal Union was founded in Berne, Switzerland, in 1874 as a result of the desire to overcome the great expenses and technical difficulties which hindered the exchange of mails between the countries of the world. At that time, international postal communication was based solely on bilateral agreements between countries, postage rates differed from one country to the next and revenue was apportioned between the originating country, the country of destination and any country through which the mail passed. At the conference in Berne, representatives from twenty-two states attended, quickly reached an agreement and on 9 October 1874 a "Treaty concerning the Establishment of a General Postal Union", commonly known as the "Berne Treaty", was signed. This was the forerunner of a multilateral convention governing the international postal service which came into force l July 1875. In 1878, the General Postal Union became the Universal Postal Union (UPU). That same year, Canada became a member of the UPU. Today there are 150 member countries. The aim of the Universal Postal Union is to secure the organization and improvement of the postal service and to promote in this sphere the development of international collaboration. With the formation of the UPU, the member countries were considered to comprise "a single postal territory for the mutual exchange of letter mail". Herein lies the principle of freedom of transit-the obligation of postal administrations to allow postal items to pass through their countries unimpeded an route from one member state to another. The Acts of the Universal Postal Union contain compulsory provisions for all member countries concerning the organization of the Union and the handling of international letter mail based on unity of the postal territory, freedom of transit and standard postage rates with common scales of weight and charges. Regulations exist which govern the despatch of registered mail, air mail and perishable or fragile items. Optional agreements govern certain specialized aspects of the international postal service such as money orders, insured items, parcels, C.O.D. items and subscriptions to newspapers and periodicals. The UPU constantly reviews the acts of the Union based on proposals put forth by member states or the Executive Council. Every five years, Congress, the "parliament" of the UPU, convenes where the member countries study the proposals and revise the acts to adapt them to new developments in the economic, operational or technical fields. Throughout its existence, the Union has wholly devoted itself to the task assigned by its founders and has also managed to maintain the youth and vigour required to adjust itself to ever changing world conditions. By pursuing its efforts to intensify international collaboration, it is contributing to bringing men and nations closer together. This year, 1974, the Universal Postal Union celebrates its centennial and to mark this occasion two stamps will be issued by the Canada Post Office on UPU Centenary Day, 9 October. The stamps, designed by George Gundersen, feature the official emblem of the UPU and an engraving of the messenger god Mercury with two winged horses. The official emblem of the Universal Postal Union is a stylized version of a bronze monument in Berne, created by the sculptor René Charles de Saint Marceaux, for the twenty-fifth anniversary of the UPU. The sculpture shows the globe encircled by five figures representing the races of man, relaying letters to one another. The Indian represents the Americas, the comely Caucasian is Europe, then come the Malayan, the Asian and African, all combining to put a postal girdle around the earth.