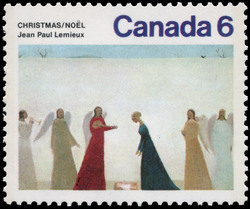 The hidden date for this stamp can be found on the angel dressed in red. For Christmas 1974, the Canada Post Office will issue four stamps featuring paintings by Canadian artists which evoke the spirit and feeling of the Christmas season in Canada: "Nativité" by Jean Paul Lemieux, "Skaters in Hull" by Henri Masson, "The Ice Cone, Montmorency Falls" by Robert C. Todd and "Village in the Laurentian Mountains" by Clarence A. Gagnon. Jean Paul Lemieux has lived most of his life in Quebec City where he was born in 1904. His interest in art was triggered at the age of ten by meeting the American painter Parnell in Montmorency, where Lemieux spent his childhood summers. Lemieux enrolled in l'Ecole des Beaux Arts de Montreal in 1926, but his studies were interrupted in 1929 when he travelled to Europe. Two years later, he resumed his courses at l'Ecole des Beaux Arts de Montreal and in 1934 he received his diploma and was named assistant professor. In 1937, he became a professor at l'Ecole des Beaux Arts de Quebec where he taught art until 1965. He now lives in Quebec City during the winters only and spends his summers at l'Île-aux-Coudres. The painting "Nativité" is reproduced with the permission of the artist.

Based on a painting by Jean Paul Lemieux.