Village in the Laurentian Mountains 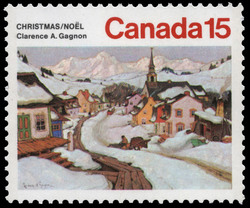 The hidden date for this stamp can be found on the boardwalk near the bottom of the stamp.

For Christmas 1974, the Canada Post Office will issue four stamps featuring paintings by Canadian artists which evoke the spirit and feeling of the Christmas season in Canada: "Nativité" by Jean Paul Lemieux, "Skaters in Hull" by Henri Masson, "The Ice Cone, Montmorency Falls" by Robert C. Todd and "Village in the Laurentian Mountains" by Clarence A. Gagnon. Clarence A. Gagnon was born in Montreal in 1881. He studied under William Brymner at the school of Art Association of Montreal from 1897 to 1900. In 1904, Gagnon went to Paris to study at the Académie Julien for one year. After travelling through Europe, he returned to Canada in 1909, to Baie-Saint-Paul in particular, his favourite sketching ground, and until 1914 he divided his time between Paris and Baie-Saint-Paul. Gagnon lived mostly in Europe from 1922 to 1936 and it was during this time that he illustrated L. F. Rouquette's "Le grand silence blanc" and Louis Hémon's "Maria Chapdelaine". Gagnon died in Montreal in 1942. In his lifetime, he worked as an etcher, painter and illustrator, always conveying his love and understanding of his native province in his art. The painting "Village in the Laurentian Mountains" is reproduced courtesy of the National Gallery of Canada with the permission of the Waiter Klinkhoff Gallery.