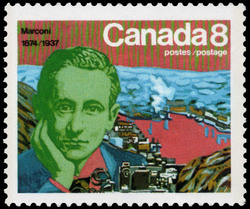 As part of its multicultural series the Post Office will commemorate the centenary of the birth of Guglielmo Marconi, father of the radio. The stamp will recognize the contributions of all Italians to the development of Canada. Marconi was born at Bologna on April 25, 1874, the son of an Italian father and an Irish mother. Young Guglielmo's educational career was not spectacular. He played hooky from his tutor and failed to qualify for both the Italian Naval Academy and the University of Bologna. However, he had always enjoyed dismantling things to see how they operated and at the Leghorn Technical Institute and in private lessons, he acquired a solid grounding in physics, chemistry and electricity. Marconi's scientific progress was not helped by his father, who believing his son was wasting time, smashed every unhidden piece of the boy's scientific equipment. In 1894 Marconi read the obituary of Heinrich Hertz, an experimenter with electromagnetic waves. Marconi immediately decided that these waves could be adapted to carry telegraphic messages and that he would prove it. His only problem was that, in his own words "the idea was so elementary, so simple in logic, that it seemed difficult for me to believe that no one else had thought of putting it into practice". Marconi worked from 1894 to 1896 with the methodical patience and determination typical of him and he increased the range of his signal to over a mile. After having been refused the support of the Italian government, Marconi moved to England where he was assisted and encouraged by William Preece, the Chief Engineer of the British Post Office. Progress was continuous, and in March 1899 the first message was beamed across the English Channel. This success conjured up the dream of spanning the Atlantic. Marconi had problems convincing his backers to finance this project especially since many top-notch scientists suspected that radio waves, travelling in straight lines, would be blocked at the horizon. Marconi, however, was never dismayed by conventional scientific opinion and he felt that all he needed was a more powerful transmitter and a more sensitive receiver to get over the one hundred and fifty mile high colossus of water between Europe and North America. He chose Poldhu in Cornwall for his transmitter and Cape Cod in Massachusetts for the receiver but when the elaborate aerials at both locations collapsed, he decided to make do with a weaker system. He compensated for this factor by moving the receiver to Newfoundland, the part of North America closest to Poldhu. The inventor landed at St. John's on December 6, 1901. The authorities allowed him to use some abandoned military buildings on Signal Hill overlooking the harbour. Nearby was a memorial to Giovanni Caboto, or John Cabot as he is better known, another Italian whose name is linked with Canada. By Wednesday, December 11, everything was in readiness and that afternoon Marconi sat down to listen for the prearranged signal, three dots of the Morse letter S. S had been chosen because dots used less energy than dashes, and it was believed they would be easier to pick out against the atmospheric background. Just before the wind tore free a balloon supporting the aerial, Marconi faintly heard a few of the S's being generated 1700 miles away. The remainder of the stay in Newfoundland was inevitably anti-climatic. Radio reception was always poor and even running an aerial from the west of Signal Hill to an iceberg grounded in the harbour didn't help. When news of the great achievement reached reporters, it was hailed as "the most wonderful scientific discovery of modern times", but a telegraph company which monopolized communications within Newfoundland was unimpressed and threatened to sue if the experiments did not cease. Marconi was just as glad because he wanted to avoid a public demonstration until he could improve reception. The stamp in honour of Guglielmo Marconi was designed by John B. Boyle. The painting in acrylics combines a portrait of Marconi with a view of St. John's harbour from Signal Hill.