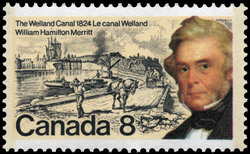 The hidden date for this stamp can be found between William Hamilton Merritt and the number 8. The Post Office will honour William Hamilton Merritt "the father of Canadian transportation" on the one hundred and fiftieth anniversary of the start of construction on his greatest project, the Welland Canal between Lake Ontario and Lake Erie. Merritt was born on July 3, 1793, at Bedford, New York. In 1796 his family settled in what is now St. Catharines. In 1811 he set up a general store and took up farming. The War of 1812 interrupted business, however, and Merritt joined the militia which he left in 1815 with the rank of Captain, after several campaigns and eight months of captivity by the Americans. The conflict with the Americans didn't prejudice Merritt towards them and within three years of the war's end, he set to work on what was to be his life's ambition, "to make Canada the avenue of trade between Great Britain and the western states". In 1818 he and some other St. Catharines' business men claimed in a petition to the legislature that a canal could easily be built to bypass Niagara Falls. Upper Canada had long needed such a project to secure naval supremacy over the United States on Lake Erie and to avoid dependence on American trade routes. A slump in agricultural prices and a customs dispute between Upper and Lower Canada postponed the task until 1824 but by then Merritt, "the eager, pushing, incurably romantic promoter", and his colleagues had raised enough money to begin the canal which, with plenty of support from the government and American investors, was ready for traffic by 1829. Monetary success was not immediately forthcoming. The Welland Canal depended heavily on local American traffic and was eventually nationalized in 1841 because of financial embarrassments. Canadians were not unanimous in their praise of the great achievement and William Lyon Mackenzie went so far as to accuse Merritt of charging his "expenses in London for clubs, theatre tickets, cigars and gin", to the company. Whatever the initial reception, the canal eventually became the kingpin of the transport system linking the Great Lakes with the Atlantic. Taking the first step on the St. Lawrence Seaway was not Merritt's only contribution. He served in the legislature from 1832 until 1860 and his position helped him to boost dozens of schemes, both great and small, many of which his fertile brain had hatched. He wanted public support for schools and libraries. He favoured annexing Montreal to Upper Canada. From a letter describing a suspension bridge in Europe, he got the idea in 1844 of building a similar structure to the United States across the Niagara Gorge. The bridge was in place within five years due to his audacity and promotional skill. Merritt was probably the first to state clearly that closer economic ties (reciprocity) with the United States would prevent annexation to it. He also believed that reciprocity would divert American wheat and flour from the New York route to Europe into the St. Lawrence system. Always the enthusiast, he more than anyone else, organized the reciprocity movement, and as the practical man of affairs, he could take much of the credit for the successful attainment of its aims. Merritt, although scornful of any "trumpery railroad" trying to compete with his beloved canals felt the two could complement each other, in securing "the trade as much as possible within our own country". He therefore proposed "one continuous railway from the Atlantic" along "the north side of Lake Ontario . . . to Detroit". Such a railway, to be built by private enterprise bolstered with government assistance, would not only transport Canadian goods to the Maritime market but would also hasten the arrival of Canadian federation. The stamp in honour of William Hamilton Merritt was designed by William Rueter. The portrait of Merritt is taken from an oil painting by Robert Whale (1805-1887). Whale painted this portrait around 1860 and it originally hung in his home "Oak Hill". The painting is presently held at the St. Catharines Historical Museum. The view of the Welland Canal is a steel engraved interpretation of an original wood engraved illustration "Lock No. 23 Thorold". The illustration is taken from George Monro Grant's "Picturesque Canada" published in 1882. This work was illustrated under the supervision of L. R. O'Brien and the wood engraving itself was executed by Schell & Hogan.