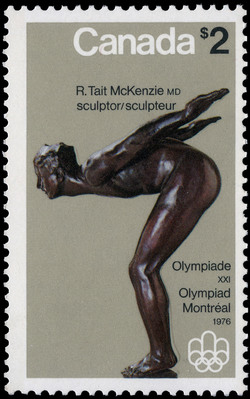 The hidden date for this stamp can be found on the arm of the sculpture. Robert Tait McKenzie, creator of "The Sprinter" and "The Plunger" was versatile. He inspired groups as different as artists and soldiers, and his biographers compared him to the ancient Greeks. However, the clamour of fame did not disturb his birth in 1867 at Almonte, Ontario. McKenzie, whose highland family had a scholarly tradition, financed his medical education at McGill University by surveying, lumbering and clerking during summer vacations. As an undergraduate he resolved to improve his delicate physique.By the end of second year, he had won the All-round Gymnastic Championship. He triedhigh jumping, hurdling, boxing and football "to balance himself physically for his two athletic specialities, swimming and fencing". After graduating, McKenzie became general and medical director of physical training for McGill and chief instructor at the Gymnasium. He sought above all else to qualify himself to train physical education teachers so that others would know the joy of effort. He attempted to set up a Physical Education Department but couldn't find enough money. The young graduate was also an anatomy professor and specialist in orthopaedic surgery, gaining renown for his research on spinal problems. His clientele outside the university included the Governor-General. The doctor painted with water colours, during his spare time. McKenzie began to sculpt, when he decided to use statuary for teaching a nd research. Having gained self-confidence with four "Masks of Expression" he began work on "The Sprinter". "It was to show the ideal... form of a sprinter... [by averaging the] dimensions of successful individuals." After three tries McKenzie overcame his lack of artistic training and produced a figure capable of supporting its own weight. His intention, in both "The Sprinter" and "The Plunger" was to show the beauty of the healthy human form at the moment of resolve. The artist often sought the supremely graceful movement in the perfect actions of perfectly developed athletes. Thesearch was aided by his work in anatomy and sport. As one of his contemporaries stated, "Probably no man filled with the aesthetic impulse has, since the days of the Greeks, seen pass before his eyes so long and varied a procession of men in the nude as he has during the physical examinations that he has conducted... The doctor believed that athletic sculpture illustrated the link between physical and spiritual virtue. Perhaps because of his faith in this relationship he supported the revived Olympics and hoped that artists would catch its beauty, power and virility. In 1904, the University of Pennsylvania hired McKenzie as director of itsPhysical Education Department. As such, he attempted to reduce the number of spectators who only watched and never played. He feared that weak minds resulted from weak bodies and suspected that students who hated games failed in other activities. The solution was to make sports part of everyday life, and to make them countable for scholastic credit in the academic world. McKenzie's contributions to American society were not restricted to the university. He founded the Boy Scouts of Philadelphia and associations dealing with playgrounds, medicine and sport. The blast of war called McKenzie to duty as a soldier. His military debut wasn't propitious. To familiarize himself with the physical education system in use, he enrolled in a course, and discovered he had written the prescribed text. Nevertheless, he went on to serve Britain, the United States, Canada and France as a rehabilitation expert. The experience had a strong impact. War devoured the young men who had been his greatest inspiration. Consequently, the sculptor dedicated much of his subsequent career to war memorials, emphasizing the self-sacrifice of youth, not the hideousness of destruction. His last wish was to have his heart buried in front of one of these monuments. While producing such a work for Almonte, he rediscovered his old love for it and he spent his final summers there. McKenzie died in Philadelphia in 1938. "The Plunger" is reproduced with the permission of the Art Gallery of Ontario. "The Sprinter" is reproduced courtesy of the Administrative Centre for Sports and Recreation in Ottawa. Allan Flaming designed these stamps using photographs by Eberhard Otto.

Based on a sculpture by Robert Tait McKenzie. Designed by Allan Robb Fleming.