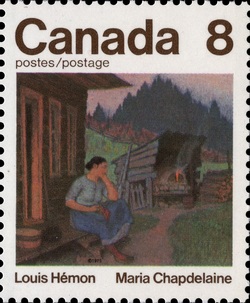 Louis Hémon was born in 1880 at Brest, France. At Paris he studied law and modern oriental languages but became restless and dropped out. In 1903, he abruptly left for England where he clerked and wrote for French sporting and automotive magazines. He also produced short stories and three novels. Believing that "life is going here and there, seeing and understanding", Hémon soon came to regard himself as "a professional investigator". Thus, in 1911, "anxious to wander yet further afield, and to learn how it fared with the little band of his fellow countrymen who crossed the sea centuries before...", he came to Canada. Here, Hémon found what he described as "a sterner struggle, a much harderclimate, and, above all, that atmosphere of simple cruelty characteristic of a young countrywhich is forging ahead and has hardly time to stop to pity and help those who fall by the way, having failed". Impressed at the survival of French culture in North America,he stated that "Quebec [City], from the top of her hill, watches the barbarian hordes [assorted European immigrants] pass... without a shadow of fear. Quebec knows that nothing in the world can overwhelm the French garden which she has piously created... The author drifted to the Lac St-Jean region, where he worked on a farm near the town of Péribonka. There, inspired by the area's people, he wrote "Maria Chapdelaine", a realistic portrayal of habitant life. Some Quebec nationalist groups dislikedthe novel, preferring the traditional romantic view of farming. The habitants, enraged at finding themselves in print, hurled Hémon's statue into the Péribonka River. Nevertheless, European acceptance of the book guaranteed its popularity in Canada. Hémon, however, did not live to see this. The open road beckoned and in 1913 on his way to the Rockies a train ran over him. The Louis Hémon stamp features a painting by Clarence Gagnon. It is one of a set of fifty-four which appeared in the 1933 edition of "Maria Chapdelaine", published by Mornay, Paris, France. This illustration is reproduced courtesy of The McMichael Canadian Collection at Kleinburg, Ontario, which holds the original fifty-four.