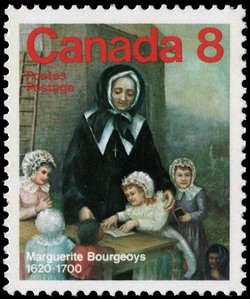 The hidden date for this stamp can be found on the side of the table. Marguerite Bourgeoys was born in 1620 at Troyes, France. According to her memoirs she became deeply religious after seeing a vision. She offered to go to the outpost of Montreal as a teacher and arrived in 1653 after several more visions. Unfortunately, most of the children had died and there were not enough for a school. However, Bourgeoys occupied herself with works of charity and of social service and by convincing the settlers to begin work on Montreal's first stone church. She was thus remarkable for her piety oven in an age when "many of the Canadian settlers [were] very devout, puritanical in fact". In 1658, in a barn, Bourgeoys opened Montreal's first school. She visited France the same year to find more instructresses. Eventually, she and the women she recruited came to be known as the Congrégation de Notre-Dame. The organization was largely self-supporting and this impressed King Louis XIV who felt the colony could not support a large number of materially unproductive ecclesiastics. Under Bourgeoys, the Congrégation de Notre-Dame quickly expanded and was soon teaching girls throughout New France, but rapid growth caused personnel problems. Six women who came from La Rochelle to teach weaving, knitting and lace making turned out to be prostitutes. The Congrégation de Notre-Dame refused to have the six and the government would have deported them if they had not been so easy to marry off. Neither this, nor the complexities of church politics, nor the dangers ofocean voyages and a pioneer society, prevented Bourgeoys from offering a substantial curriculum. It included reading, writing, arithmetic, Latin, household arts for simple remedies, rudimentary chemistry and botany. There was a strong emphasis on religion andon training the girls "to have pleasing manners and be good conversationalist". The dedication of Bourgeoys and those like her, explains why in these early years Canadian women were as well educated as women in France and better educated than Canadian men. Bourgeoys died in 1700. Design & Communication designed the Bourgeoys stamps.

Designed by Jacques Roy Based on a painting by Elmina Lachance