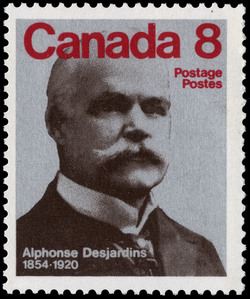 The hidden date for this stamp can be found on Alphonse's collar. Alphonse Desjardins was born in 1854 into a poor family. As a young man, took part in a military expedition to Manitoba during the first Riel affair. In 1871 Desjardins went into journalism and later on his own initiative, he began recording and publishing the debates of the Quebec Legislature. He lost the right take notes there in 1890 reportedly because he would not alter his transcript powerful politician's indiscreet remarks. Desjardins then founded a short-lived newspaper. From 1892 to 1917, he was a Hansard reporter in Ottawa. Because of his early poverty, Desjardins had a desire to help the poor. In 1897 he listened to a House of Commons debate on loan sharking. The revelations electrified him, especially the story of an individual who paid $5,000.00 interest on a $150.00 loan. Desjardins decided that credit unions might solve the problems and he spent the next several years corresponding with experts in Europe and studying. In 1900, at Lévis, Quebec, he founded the first American credit union. He designed it to serve the "very humblest classes" as moral and educational force which would combat individualism, lack of foresight disdain for small savings and the mania for luxury. The process of joining organization and of getting and repaying a loan would develop "honesty, industrious habits, good conduct and thrift..." among the poor. Desjardins hoped the Lévis branch and those which followed could improve agriculture by keeping money in rural areas and could make French Canadians economically independent from other ethnic groups. The founder planned to achieve these ends emphasizing local and democratic control of credit unions and by making capital their slave rather than their master. After 1900, while maintaining his job in Ottawa, Desjardins spent as much time as possible nurturing his creations. When he was not in Lévis, his wife handled the affairs of that branch. He died in 1920. Design & Communication designed the Desjardins stamp.