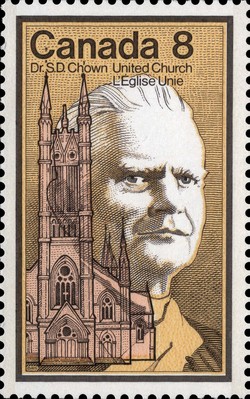 The date for this stamp is in the bottom-left corner. Samuel Dwight Chown was born in 1853 at Kingston. As a boy, he served in the army during the Fenian raids. At seventeen, he left home for Minnesota to make his fortune in hardware. An urgent telegram brought him back to Kingston where he discovered that nothing was wrong "except that his mother was lonesome for him". In 1874, having fell the call, Chown began preparations for the Methodistministry. His ordination occurred in 1879. During the next twelve years, he served in smalltowns where he emphasized the virtues of temperance. At Kemptville, Ontario, he so antagonized the local liquor interests that they threatened to kill him. Theyburned the Methodist manse and church but only after Chown eventual transfer. Between 1892 and 1902, he lived in Montreal and Toronto a gained a reputation as an administrator. The Methodists appointed Chown as Secretary of their Department of Temperance, Prohibition and Moral Reform, in 1902. He rapidly expanded Department's work and it was soon dealing not only with alcohol but with women's rights, education, municipal sanitation, mental health, narcotics, prostitution and immoral stageproductions among other things. Chown's "conviction that Christianity requiredapassionate commitment to social involvement" inspired his efforts. If the Churches didnot act, he feared they would force "people to choose between an unsocial religion,which [could not] be Christianity, and irreligious system of social salvation". William Southern designed the Chown stamp. George A. Gundersen interpreted and engraved the Chown design.