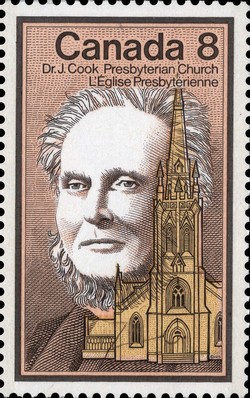 The date for this stamp is in the bottom-right corner. John Cook was born in 1805 at Sanquhar, Dumfriesshire, Scotland. He attended university at Glasgow and Edinburgh and became a Doctor of Divinity. He arrived in Canada in 1836 as Minister of St. Andrew's Presbyterian Church in Quebec City. A deep thinker and reasoner and a man of noble presence who would have been singled out among a thousand for his distinguished appearance, Cook was well suited toSt. Andrew's, a church with a large and enlightened congregation in a city which was a hive of commerce and industry. Everyone was so happy with the new minister that he stayed for forty-seven years. His sermons were especially satisfactory. Theywere "models of literary form and texture ... [notable] for their beauty of diction, clearness of thought and lofty eloquence". Quebec City benefited from Cook's boosterism and his strong sense of progress. He loved Canada although he may have been slightly uncomfortable here. Until it was moved, a jail where public executions took place, was next door to his home. Doctor Cook had a great deal of business sense and was a "prince of committeemen". Inevitably he gravitated to some of the administrative boards and higher leadership positions in the Church. Certain British North-Americans elected him their Moderator in 1838 and again in 1844 when despite his best efforts, a Scottish schism divided the Canadian Church. He soon began to work for a reunion. All the diverse Presbyterian Churches in Canada finally united in 1875 and they recognized Cook's achievements by proclaiming him the first Moderator. Education was one of the Doctor's foremost concerns. He helped establishthe High School in Quebec City and he ran the local Presbyterian College. Many regard him as "prime founder" of Queen's University which he served as principal, when no one else would take the job and as chancellor. Doctor Cook died in 1892 and will always be remembered for his "rare accomplishments and ripe culture...". William Southern designed the Cook stamp. George A. Gundersen interpreted and engraved the Cook design.