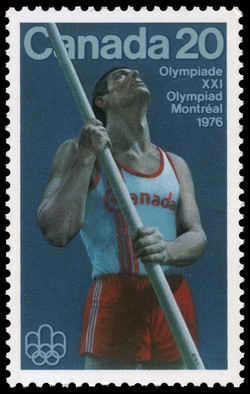 This date for this stamp is hidden at the base of the vaulter's pole. Track and field events are "the core of the modern Olympics". Although more widespread than other sports, sprinting, distance running, jumping and throwing are not primarily recreational. They are highly competitive in nature and perhaps as a result, they have a long, glorious history both in Canada and elsewhere. During the pioneer era, "no friendly gathering was complete without contests of strength, footraces and jumping". Celebrations on July 1, 1867, the first Dominion Day, included track and field as did the annual picnics of policemen, firemen, ethnic groups and religious organizations. Some of the most popular nineteenth century events were never part of the Olympics. Sack races, three-legged races and climbing a greased pole have fallen into a decline as has the water can race, in which each runner began with a full pail of water on his head and the person who retained the most water triumphed. Winners usually received a cup or a medal, "but most contestants preferred. practical items such as watches, canes, barrels of beer and telescopes". The ancient Olympic champions were more scrupulous. They were amateurs who won only honour and "a garland cut from a wild olive tree which grew in the sacred grove.". The honour was so great that when Diagoras of Rhodes became an Olympic victor, one of his cronies said "Die, Diagoras, for you have nothing short of divinity to desire". Nevertheless, when a conquering hero returned home from the Games, his fellow citizens would welcome him with free meals, free lodging and freedom from taxes for the rest of his life. The efforts of previous centuries seem rather quaint when compared to the track and field competition at the modern Olympics. The confusing variety of events has disappeared. Athletic performances have continually improved due in part to better techniques and conditioning methods. The price of success has gone up. More time and pain are demanded from those who wish to be top performers and individuals must increasingly specialize in a single event. The consequence of all this is that speculation on the ultimate of human physical potential is as futile today as it was in 1900. The greatest change in track and field has been the large scale participation of women. There has, of course, been a certain amount of resistance. At the 1928 Amsterdam Olympics, a group of men urged that women's sports be eliminated from future Olympic Games. The group believed "that strenuous sport was physiologically and psychologically unsuitable for women". However, women refuted these argumentsby winning several medals at Amsterdam. Indeed, Canadian women have, as often asnot, done better than Canadian men in international competition. National track and field reached its peak in the years immediately preceding 1914 although there were some magnificent accomplishments in the twenties and early thirties. It was not until the sixties that Canada again appeared in the ranks of the world's top runners, leapers and throwers. For 1976, hopes are stronger than ever that Canadian athletes will reach the top in track and field. Today there is more support for amateur athletes. Times have changed from 1906 when William Sherring of Hamilton, who was to win the marathon, could gather only enough money for a one-way ticket to the Games on a cattle boat. More important though, is that public interest and participation in sport is growing faster than ever. Peter Swan designed the track and field stamps.