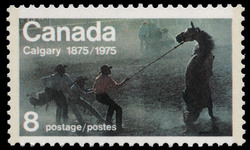 The hidden date for this stamp can be found underneath the horses hind legs. Calgary knows how to celebrate. There should be plenty of hooting and hollering during the city's 1975 centennial. Fred Kanouse, a Montana Deputy Sheriff, was the first white resident of the Calgary area. In 1871 he established a post where he sold beverages and other items to the Indians. Kanouse survived a battle with his customers and departed only after his building accidentally blew up. In 1875 the Mounted Police needed a base in the "uneasy Indian territory", "between Forts Macleod and Walsh in the south and Fort Edmonton in the north.". That fall, Inspector A. E. Brisebois chose the site of Calgary for the new base. Everyone liked the view. A Sub-inspector wrote that "Our first sight of this enchanting spot was never to be forgotten. by far the most beautiful we had seen since our arrival in the West... The police hired the I.G. Baker Company of Fort Benton, Montana, to erect a stockade at the chosen spot. The company foreman appeared with men and materials only two weeks after Brisebois and his troop. Early Calgary got most of its supplies from Fort Benton. These came by bull train. Bull trains consisted of three wagons, hooked together and pulled by eight pairs ofoxen. A "bull-whacker" controlled the procession. His qualifications included skill with a whip, a powerful voice, an understanding of oxen and a "vocabulary capable of impressing" them. When the railway passed through in 1883, it assured Calgary's future, but rail lines wiped out the "bulls". Southern Alberta was a colossal pastureland. Cattle could graze all summer and, thanks to chinooks, most of the winter. However, thousands of animals starved in the occasional bad winter without a chinook. Generally though, the range was safe once the buffalo disappeared. Buffalo would have adopted cows and killed bulls. The first big herd of cattle arrived in the district in 1881 when the ubiquitous I.G. Baker Company brought in three thousand head for a local rancher. Calgary experienced many problems characteristic of the prairie frontier. During the Riel Rebellion, nearby Indians made the townsfolk nervous. They thus gained a strong sense of Canadianism when Ottawa sent troops for their protection. Uncontrolled dogs sometimes plagued the population. One sufferer wrote that "Night after night we are kept awake by dismal howls. Now and again we hear a rifle shot, and grow happy in the belief that there is one dog less... Street maintenance was mediocre. The city's most notorious newspaper reported the following conversation: Child: (looking up an important street) "I'm glad I am a child.". Mother: "Why, my darling Skookum-wookum?". Child: "Because I stand a show of living for 75 years and perchance seeing the day when 8th Avenue will be free from... excavations, gravel heaps. pipes, barricades and street corner loafers." Calgarians always knew they had a splendid future. Their town boasted the longest bar in Canada west of Winnipeg. Newspapers, railways and the telegraph rapidly ended isolation and everyone agreed that an interesting Alberta scandal would soon hit the British press. A Calgarian learned as quickly as anyone else that "Queen Victoria is said to now weigh 200 lbs". The city made a strong bid to become capital of Alberta but Edmonton triumphed despite allegations that it was "too close to the North Pole". Nevertheless, Calgarians still feel the pride they felt in 1885 when they claimed that "Without the slightest exaggeration, there is absolutely no place in... the Northwest... which offers so fair a home, so fair a return for outlay and so fair a future as this same Calgary". Bernard Reilander designed this stamp using Walt Petrigo's photograph "Untamed" which depicts a wild horse race.