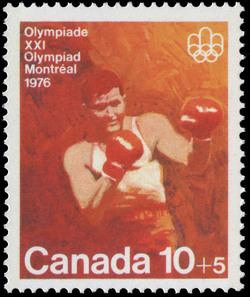 The hidden date for this stamp can be found right above the "10+5" text. Pushbutton destruction has made combat sports seem like pleasant anachronisms. However, such activities have a physical and some say a moral value. The Olympic combat sports are represented in these semi-postals by boxing, fencing and judo. Since hands are a person's most natual means of defence, boxing is widespread and ancient. Stone carvings over six thousand years old depict the sport. The Greeks enjoyed an unsophisticated form of boxing but had no weight classifications or rounds. Fights continued until there was a victor. Competitors stood toe to toe and hammered each other hoping to prove that they could take as well as deliver punishment. Referees "enforced rules by flogging offenders". The Roman contribution was the invention of the cestus, a boxing glove with iron weights and spikes. The authorities eventually banned boxing but in the seventeenth century, the English revived it, it became popular once the gentry ceased to carry weapons. The Queensbury rules emerged in 1867 and apply today with only a few modifications. In Canada the attitude towards boxing has swung between acceptance and disapproval. Early matches were associated with disreputable characters and took place in secrecy to avoid police intervention. Nevertheless, the sport spread rapidly during the first World War when it proved useful in military training. Since then, the cycle of acclaim and neglect has continued. James Hill of Toronto designed these stamps.