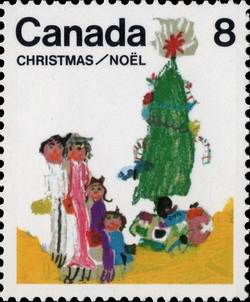 The hidden date for this stamp can be found on one of the presents under the Christmas tree. The Post Office has brought the freshness and variety of young minds to the 1975 Christmas stamps. Six designs were selected from the works of 80,000 children under age thirteen who expressed themselves on the topic "What Christmas Means To Me". Children's art follows a well defined sequence of development. Between the ages of two and four most youngsters begin to scribble on anything convenient. Scribbles occasionally represent people or objects. By listening to the artist, it is possible to find how his or her imagination is working. Details soon evolve from the scribbles. The favourite subject is the human figure which is usually portrayed by stereotyped symbols. Children omit parts of the body, but exaggerate items critical to the concept being conveyed. A painting of a girl holding a stick might show her with a single arm and a huge hand . Children draw what they feel rather than what they know. There are few attempts to give pictures a setting although eventually a base line appears. In the first, second or third grades, a new stage begins. Pictures are characterized by more complex situations and relationships, by a standard formula for human figures and by a base line to define space. People have large heads, small bodies, matchstick arms and legs and little clothing. Details such as fingers, toes and teeth may be absent. Outdoor scenes include the sun as well as blue and green bands to represent the sky and the grass. "By this time, the child relates colours to the object." Important parts of the scene are still exaggerated. Children between the ages of nine and twelve usually have developed the skill of their small muscles and have become more self-conscious. These children have become very aware of detail and seek perfection and realism. Proportions between figures and other elements are consequently more consistent and literal. The sky descends to meet the horizon. Sex differences arise in subject matter. Aeroplanes, rockets, ballet dancers, girls in formal dresses, and horses' heads are popular themes. These and other stereotypes persist in children's art because stereotypes make youngsters feel they know how to draw. Children thus respect skill and have difficulty believing that anything done without skill can be worthy. The 80,000 children who participated in the project took many approaches to the meaning of Christmas. Several crucifixion scenes, and even a painting of a machine gun, were submitted. The regional juries and, at the national level, the Advisory Committee on Stamp Design had difficulty choosing only six pictures. However, one of the six is: Family done in oil pastel and poster paint by Lorraine Caldwell, 7, of Scarborough, Ontario. The Post Office congratulates these individuals and thanks them and the other children who took part. It is hoped that everyone enjoyed the experience. The Post Office also thanks all the people and institutions who contributed time and energy to the Christmas stamp project, including provincial and territorial education departments, associations for the mentally retarded, and participating art galleries.