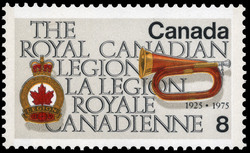 The hidden date for this stamp can be found near the horn's mouthpiece. Especially for veterans, the effects of the Great War would not go away. In Canada, as elsewhere, economic difficulties victimized many returned men. Mutual distrust arose between officers and other ranks. The existing legislation and the administrative machinery could not solve the problems of those who had served. Many veterans groups thus sprang up, but circumstances demanded a united organization. Field Marshal Haig, Commander of the British Empire's forces on the Western Front, and Sir Richard Turner, a Canadian soldier, helped inspire the creation of such an organization. A unity convention met at Winnipeg in November 1925, and most previous groups merged to form The Canadian Legion which, in 1960, by royal assent, became The Royal Canadian Legion. The founders decided to stand for peace with strength and for loyalty to Canada, the Empire and the Monarchy. The Legion was to safeguard veterans and their dependents, to protect the families of the fallen, and to make sure that wartime sacrifices would be remembered. Despite these intentions, certain individuals believed that because the group denied membership to anarchists and communists, a strong-armed, fascist movement was in the making. However, the rumours did not persist and, with Saskatchewan veterans in the vanguard, the membership of most former servicemen's groups flocked to the Legion. The Legion's prime concern has always been veterans and their dependents. Money from poppy sales aids such people when they are in distress. The organization has helped thousands to press claims for government benefits and has lobbied for improved veterans legislation. As early as April 1926, the group sought amendments to the Pensions Act, the Soldier Settlement Act and the Civil Service Superannuation Act. Such efforts procured assistance, unheard of following the First World War, for people being discharged after the Second. The Legion tried to make military life more pleasant. During World War II, Canadian Legion War Services provided members of the forces with recreation, personal guidance and opportunities for education. The educational effort produced better soldiers, sailors, and airmen, prepared military personnel for civilian life, and prevented "boredom in the long winter nights." Some credit this program with raising literacy rates in parts of Canada. Beyond concern for the veteran, the Legion has a sense of public duty. In 1928 the organization offered child rearing advice. The Legion's first national convention wanted to develop a "spirit of Empire" to offset dangerous foreign activities. Before and during World War II, the organization fought complacency. More recently, the group has sought reform in various fields and has provided many community services. To mention only one, there are hundreds of places in Canada where the Legion Hall is the only social centre. Rudy Kovach of Vancouver designed The Royal Canadian Legion stamp which evokes the feeling of remembrance.