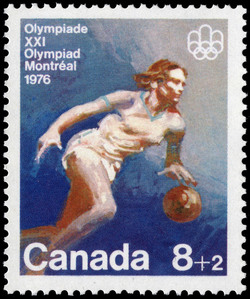 The fourth set of Olympic Semi-postals features gymnastics, basketball and soccer. The two team sports are perhaps the most popular in the world and gymnastics, while not so widespread, is growing steadily. James Naismith invented basketball in 1891 at Springfield Massachusetts. Naismith, a native of Almonte, Ontario, and a McGill graduate felt a calling to "that special combination of Christian living and athletic endeavour that was the YMCA ideal". He enrolled at the YMCA school in Springfield where he subsequently became an instructor. Naismith soon began work on a problem plaguing physical educators. Students could not play baseball or football during the winter and they found calisthenics boring. A new game was required. Naismith felt it would have to be an exciting, easily learned, non-violent, indoor team sport played with a large ball. The object of the game, he decided, would be to hurl the ball into a box suspended high in the air, but since no boxes were available for the first game, peach baskets were used. Naismith's enthusiastic students thus proposed the name "basketball". For this set of Olympic Semi-postal stamps featuring team sports and gymnastics, artist James Hill portrayed basketball, vaulting and soccer by showing the individual athletes in action. James Hill's medium is casein paint. He has depicted a single figure in a moment of intense action with extraneous detail eliminated to focus on the movement. The feeling of motion is accentuated by the dynamic pose of the single figure. The brushstrokes forming the indefinite background give a feeling of depth and further emphasize the movement. The predominant cool blue colour of these stamps is in contrast to the hot, aggressive orange-reds of the previous set of Combat Sports Olympic Semi-postals, also designed by James Hill. Mr. Hill is a well known Canadian illustrator, whose work has appeared in numerous Canadian and U.S. magazines over the years. In addition to winning many awards, he was named Artist of the Year in 1966 by the Society of American Artists, an honour hitherto conferred only on Norman Rockwell and James Spanfeller. He also holds the distinction of being the first illustrator ever elected to the Royal Canadian Academy of Arts.