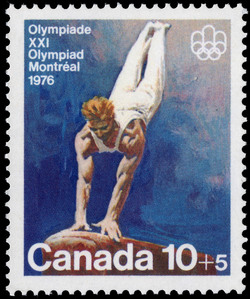 The fourth set of Olympic Semi-postals features gymnastics, basketball and soccer. The two team sports are perhaps the most popular in the world and gymnastics, while not so widespread, is growing steadily. The ancient Greeks practised a primitive form of gymnastics as training for combat sports. Later they elevated gymnastics to a place at the Olympics. The great revival of sport in the nineteenth century, however, marked the beginning of modern gymnastics. It quickly proved to be a fine form of physical and mental discipline and to have recreational and therapeutic value. In addition, it proved to be one from which both men and women could benefit. Present day gymnastics is a combination of Swedish and German systems. There has been a gradual change from an emphasis on strength to an emphasis on fluidity of movement. Canadians have been interested in gymnastics mainly as a method of physical training. For this set of Olympic Semi-postal stamps featuring team sports and gymnastics, artist James Hill portrayed basketball, vaulting and soccer by showing individual athletes in action. James Hill's medium is casein paint. He has depicted a single figure in a moment of intense action with extraneous detail eliminated to focus on the movement. The feeling of motion is accentuated by the dynamic pose of the single figure. The brushstrokes forming the indefinite background give a feeling of depth and further emphasize the movement. The predominant cool blue colour of these stamps is in contrast to the hot, aggressive orange-reds of the previous set of Combat Sports Olympic Semi-postals, also designed by James Hill. Mr. Hill is a well known Canadian illustrator, whose work has appeared in numerous Canadian and U.S. magazines over the years. In addition to winning many awards, he was named Artist of the Year by the Society of American Artists, an honour hitherto conferred only on Norman Rockwell and James Spanfeller. He also holds the distinction of being the first illustator ever elected to the Royal Canadian Academy of Arts.