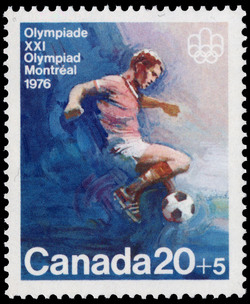 The hidden date for this stamp can be found on the shoe of the soccer player. The fourth set of Olympic Semi-postals features gymnastics, basketball and soccer. The two team sports are perhaps the most popular in the world and gymnastics, while not so widespread, is growing steadily. Soccer, often called association football, is one of the games which evolved from medieval British sport "in which a round or oval object, usually the inflated bladder of an animal, was kicked, punched, carried or driven toward some goal". The sport was so popular that King Edward III banned it in 1365, fearing that it endangered national security by competing with archery. The ban had little effect. Mobs continued to play in the streets and whole parishes competed against one another, sometimes setting the goals several miles apart. Regrettably, the pastime gained a reputation for violence. In 1847, for example, one English mayor needed cavalry to stop a local match.. Nevertheless, in the nineteenth century when schools took up the sport, it became more orderly and it gave birth to rugby football, North American football and soccer. For this set of Olympic Semi-postals stamps featuring team sports and gymnastics, artist James Hill portrayed basketball, vaulting and soccer by showing individual athletes in action. James Hill's medium is casein paint. He has depicted a single figure in a moment of intense action with extraneous detail eliminated to focus on the movement. The feeling of motion is accentuated by the dynamic pose of the single figure. The brushstrokes forming the indefinite background give a feeling of depth and further emphasize the movement. The predominant cool blue colour of these stamps is in contrast to the hot, agessive orange-reds of the previous set of Combat Sports Olympic Semi-postals, also designed by James Hill. Mr. Hill is a well known Canadian illustrator, whose work has appeared in numerous Canadian and U.S. magazines over the years. In addition to winning many awards, he was named Artist of the Year in 1966 by the Society of American Artists. and honour hitherto conferred only on Norman Rockwell and James Spanfeller. He also holds the distinction of being the first illustrator ever elected to the Royal Canadian Academy of Arts.