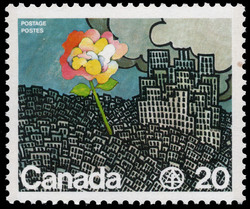 The hidden date for this stamp can be found on the right side of the skyscrapers. Neanderthal man, in his cave, was better housed than millions of people are today. Our situation is not improving. Habitat, the United Nations Conference on Human Settlements, will consider this and other problems. When the United Nations convened in 1972 at Stockholm, Sweden to discuss the environment, human settlements had first priority. But so dismaying were the findings that Canada suggested a further conference. Consequently, from 29 May to 11 June 1976, as many as 6,000 delegates from about 125 nations will gather in Vancouver at what likely will be the largest ever UN meeting. The city will simultaneously host a convention of non-governmental organizations interested in settlements. The problems facing the Habitat conference are immense. Between 1976 and the year 2000 the world's population will nearly double and, for the first time, the planet will be more urban than rural. Experts are having ghastly visions of a city in India with 30,000,000 people. By 1985, Tokyo will probably have more inhabitants than Canada. Everywhere, more and more individuals will suffer the poverty and hopelessness of slums which destroy the family and neighbourhood and which promote violence. Over the next three decades, more buildings will be required than humans have erected in history. Inadequate food and energy, increasing illiteracy and the possibility of fifty percent unemployment, complicate the settlements question in developing nations. While most citizens of rich countries have adequate housing, these people can no longer be sure of finding peace and quiet, creative recreation or privacy. Sudden death at the hands of the automobile, and smogborne lung cancer and emphysema threaten the prosperous. The suburban lifestyle divides numerous families by trapping one spouse at home and keeping the other absent for long periods. Regional disparities, land speculation and high costs plague some nations. There is a "pervasive lack of beauty, order and stimulus..." Many of earth's rural areas are losing vigour, as the young and the educated throng to the cities. Canadians are generally well housed, although we too are encountering difficulties. Should current population and urbanization trends continue, we will, within twenty-five years, need the equivalent of forty or fifty new cities the size of Halifax. One-third of the population could be crammed into Montreal, Toronto and Vancouver. Rural decay will accompany this growth as farm land ceases production and as the new generation leaves the soil. Despite these nightmarish dilemmas, there will not be any wailing and gnashing of teeth when the delegates congregate in Vancouver. The accent will be on the search for, and the exchange of, workable solutions to the settlements crisis. Each country has been asked to film a few of its outstanding achievements in the settlements field. Canada has helped nearly thirty developing nations prepare their presentations. In turn, we expect to learn much. Thus, Habitat is bound to create a positive attitude and to achieve positive results. Designed by Ian MacLeod of Ottawa, the stamp commemorating the Habitat Conference captures the mood of the human settlements problem and the hope for the future. Mr. MacLeod has graphically depicted ominous clouds threatening the city and crowded urban mass, with the flower of beauty and hope springing from the heap. Also included in the design is the symbol of Habitat which combines three forms: the circle, emphasizing the universal nature of the problem; the Greek letter Delta, representing shelter; and the human figure, appealing for better ways to provide this shelter.