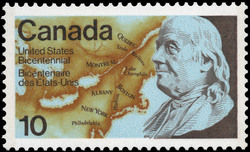 The hidden date for this stamp can be found near the base of the image of Benjamin Franklin. In celebration of the United States Bicentennial, the Canada Post Office and the United States Postal Service will simultaneously issue stamps of a common design featuring Benjamin Franklin, a Postmaster General of British North America and a founding father of the United States. Benjamin Franklin contributed to the Canadian postal system by opening post offices in Montreal, Trois-Rivières and Quebec City. The system used the existing road between Montreal and Quebec City. The road was already equipped with post houses at nine-mile intervals. Franklin also established a courier service between Montreal and New York City. The service ran via Lake Champlain and the Hudson River and operated twice monthly in summer and once monthly in winter, linking Canada to the mail packet sailing between New York and England. Indeed, until 1788 all letters from central Canada to Halifax travelled through New York. The two new stamps, which bear a common design and engraving, will differ only in colour, typography and method of printing. The Canadian stamp will be printed by steel and gravure, the American stamp by steel and lithography. This is the first joint issue between Canada and the United States since the St. Lawrence Seaway stamps of 1959. Franklin was born in Boston in 1706. His father, fearing the lad might run off to sea, apprenticed him, at age twelve, to a printer. At seventeen, flouting his apprenticeship, young Benjamin decamped to Philadelphia where he eventually set up his own shop. A hard driving businessman, Franklin achieved financial security and in 1748 retired to pursue other activities. Besides being a businessman, Franklin was an athlete of note, a talented writer and a renowned scientist. Canada perhaps first entered Franklin's thoughts as a military threat. He urged the English colonists to arm against the French and gambled £20,000 of his own money in the struggle to crush the Northern menace. Britain soon did conquer Canada, which Franklin then toured in the capacity of Postmaster General for British North America, opening post offices and establishing the Montreal-New York courier service. For the next few years, Franklin rarely mentioned Canada although he satirized ignorance of North America by telling British newspapers that hungry whales pursued cod from the Atlantic to Niagara Fails. He added that "the grand leap of the whale in the chase up the Fails of Niagara is esteemed by all who have seen it as one of the finest spectacles in nature." When the American War of Independence broke out, Franklin sided with the revolutionaries. They had captured Montreal and were besieging Quebec. Early in 1776, Congress sent Franklin north to proclaim the gospel of liberty. Franklin, however, had been in Montreal but a few days when the British navy arrived in Quebec. The Americans retreated and Franklin departed. Congress then despatched him to Paris. He arrived safely and used his great popularity and prestige to whip up French support for the revolution. Franklin participated in the peace negotiations, at one point hinting that Britain should donate Canada to the United States. After the war he returned to Philadelphia, where he died in 1790. Bernard Reilander of Ottawa designed the United States Bicentennial stamp. It features a portrait of Franklin in brown placed against a blue and ochre background map. The portrait was derived from a marble portrait head by an anonymous Italian sculptor based on a terra cotta bust of Franklin modelled in 1777 by the French sculptor Jean-Jacques Caffiéri. The background is an adaptation of an early engraved map of British North America published in 1776 by R. Sayer and J. Bennett in London, England. The places on the map are all important to early postal history in North America and include the three Canadian post offices established by Franklin. The United States Bureau of Engraving and Printing, working from the original design, created the master engraving of the Franklin portrait and of the place names.