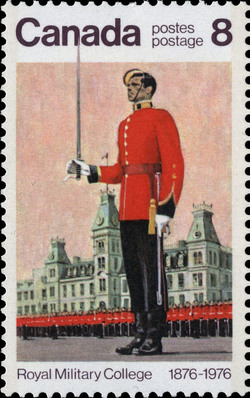 The hidden date for this stamp can be found to the right of the soldier at knee height. The Royal Military College of Canada in Kingston, Ontario, has served Canada proudly for one hundred years. Together with Royal Roads, established in 1942 near Victoria, B.C., and the College militaire royal de Saint-Jean, opened in 1952 at Saint-Jean, Quebec, RMC trains and educates officer cadets and commissioned officers. The colleges provide a broad-based university education, develop leadership, bilingualism and physical fitness, and stimulate "awareness of the ethic of the military profession." Feeling that "a self-governing colony ought to shoulder the burden of its own defence," Prime Minister Alexander Mackenzie founded a college for officer cadets in 1876. The college was to emphasize engineering, a valuable martial art and a civilian skill of which the young nation had a tremendous need. Indeed, by 1900, hardly a Canadian "bridge, road, or railway line was built without the assistance of an engineering graduate of RMC." Prime Minister Mackenzie installed the new school on Point Frederick at Kingston, a city rich in military lore. Comte de Frontenac, Governor of New France, built a fort there in 1673. Point Frederick itself was the only freshwater dockyard in British naval history. During the War of 1812, the facility was "used effectively to save Canada." The Military College opened on 1 June 1876 with the arrival of the first class of Gentlemen Cadets, "The Old Eighteen". They were greeted by Commandant Edward Hewett, a British officer who established the school's high standards and reputation and the motto "Truth, Duty, Valour". While Hewett was commandant, Queen Victoria granted the college the title "Royal", and the Mackenzie Building, appearing in one of the stamps, was erected. From the beginning, the school imbued cadets with "a sense of responsibility, of self-discipline, of fair play, and of fellowship." "The traditions, the discipline, the spit-and-polish smartness [were] ... largely responsible for building character and producing leaders" and for giving the school its colour. It is a tribute to the quality of people who have attended RMC and to the quality of the education and training, that the graduates have a spectacular record of achievement, including eight Rhodes scholarships since 1959. RMC created a nucleus of highly skilled officers such as Generals Crerar and Simonds and Air Marshal Billy Bishop, Canada's foremost air ace. Around individuals of this type, the nation assembled powerful forces. However, in forging some of Canada's greatest military feats, ex-cadets sacrificed much. The Memorial Arch at RMC, pictured in one of the stamp, commemorates those killed in wartime. RMC graduates have received many honours, including two Victoria Crosses. Former students were prominent within the RCMP. In government, business, law, medicine, science, education and other fields, the alumni have exalted the name of the Royal Military College of Canada. Will Davies RCA, the designer of this stamp, is a native of Ontario, and studied at the Royal Canadian College of Art in Toronto where he now teaches. He was elected to the Royal Canadian Academy of Arts in 1974. He has depicted an important ceremonial occasion in Military College life: a Wing Parade in front of the Mackenzie Building.