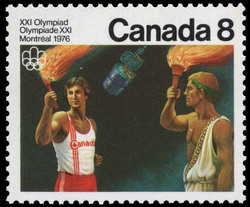 The hidden date for this stamp can be found on the Canadian torch bearer's shorts. Olympic ceremonies are infused with a grandeur and symbolism perhaps as meaningful as the athletic events themselves. The flame ceremony, the opening ceremony and the victory ceremony reflect the idealism of the Olympic movement. People at the 1936 Berlin Games witnessed the first Olympic flame ceremony. Relay runners carried a torch from Olympia, Greece, to the German capital. Organizers of the Montreal extravaganza have improved upon this traditional process. In 1976, at Olympia, the sun will, as usual, kindle a flame. However, once runners bring it to Athens, a satellite will transmit it to Canada. At Athens, the flame, when placed between two charged metal plates, will stimulate an electrical voltage. This will trigger a device producing a sequence of tones which will travel over telephone lines to a Greek transmitting station and subsequently to the satellite. When the tones land in Canada, they will flash via telephone wires to Parliament Hill in Ottawa where they will revert to their fiery form through the medium of a laser beam. From Ottawa, runners will speed the flame to Montreal and Kingston. The flame, evoking both light and hope, reflects the Olympic spirit. The fire is an inspiration for youth and a uniting element between the ancient and the modern games. In 1936, the founder of the modern Olympics, Baron Pierre de Coubertin said, "Athletes, remember the fire which, lit by the sun's rays, has come from Olympia to lighten and warm our times... Be careful to keep the sacred flame alive." The three Olympic Ceremonies stamps are the work of Peter Swan. Illustrated on the 8¢ stamp is the transfer of the Olympic flame from Greece to Canada via satellite. Mr. Swan, whose work has previously appeared on Canadian postage stamps, is an internationally known Toronto illustrator. He has been recognized by Communications Arts magazine and the New York Society of Illustrators as being pre-eminent in his field. One of his most recent awards is a gold medal in the Editorial Art category received from the Art Directors Club of Toronto in 1975.