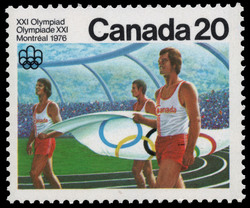 The hidden date for this stamp can be found on the shorts of one of the flag holders. Olympic ceremonies are infused with a grandeur and symbolism perhaps as meaningful as the athletic events themselves. The flame ceremony, the opening ceremony and the victory ceremony reflect the idealism of the Olympic movement. The opening ceremony will take place at the Olympic stadium. The Head of State normally declares the Games open. The day's ritual will include the entry of the athletes, headed by the Greek national team. Other countries will follow in alphabetical order, with the exception of Canada which, as host country, will appear last. To welcome the competitors, a group of young Canadians will give a display of rhythmic dancing. The flame will arrive after three guns fire and after a flock of pigeons ascends from the stadium. This is assuming the birds co-operate. In 1936, when pigeons were released, they refused to depart. After the runner with the torch has circled the track, he or she will light the Olympic flame which will burn until the Games conclude. For the opening's grand finale, the Mayor of the previous host city, Munich, will hand over the official Olympic flag to Montreal's Mayor. The three Olympic Ceremonies stamps are the work of Peter Swan. Illustrated on the 20¢ stamp, is the carrying of the Olympic flag during the Opening Ceremony. Mr. Swan, whose work has previously appeared on Canadian postage stamps, is an internationally known Toronto illustrator. He has been recognized by Communications Arts magazine and the New York Society of Illustrators as being pre-eminent in his field. One of his most recent awards is a gold medal in the Editorial Art category received from the Art Directors Club of Toronto in 1975.