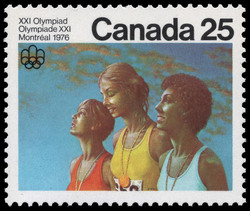 The hidden date for this stamp can be found on the gold medalist's shirt.

Olympic ceremonies are infused with a grandeur and symbolism perhaps as meaningful as the athletic events themselves. The flame ceremony, the opening ceremony and the victory ceremony reflect the idealism of the Olympic movement. Shortly after the final contest in each sport, victory ceremonies will take place at which first-, second- and third-placed athletes will receive their gold, silver and bronze medals. Other activities will cease while the winners mount the traditional podium to receive their medals from the president of the international federation of their particular sport. After the flags of the three winners' countries are raised and after the national anthem of the gold medalist's country is played, other events will resume. The three Olympic Ceremonies stamps are the work of Peter Swan. Illustrated on on the 25¢ stamp, are three victorious athletes receiving their Olympic medals. Mr. Swan, whose work has previously appeared on Canadian postage stamps, is an internationally known Toronto illustrator. He has been recognized by Communications Arts magazine and the New York Society of Illustrators as being pre-eminent in his field. One of his most recent awards is a gold medal in the Editorial Art category received from the Art Directors Club of Toronto in 1975.