Olympiad for the Physically Disabled 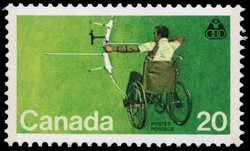 The hidden date for this stamp can be found on the back of the archer's wheelchair. Early in August, approximately 2,000 handicapped athletes from as many as eighty-three countries will arrive in Toronto to compete in the Olympiad for the Physically Disabled. These handicapped athletes, highly trained, extremely competitive and rigorously selected, will prove once again that it is ability, not disability that counts. The value of sport as therapy for the disabled first made itself evident at the spinal injuries treatment centre established during World War II at Stoke Mandeville, England, by Professor Sir Ludwig Guttman. Formerly, eighty percent of paraplegics died within three years; nowadays, eighty percent can expect a normal lifespan. This is largely due to the therapeutic effects of competitive sport. The thrill of competition, the comradeship, and the opportunity to maximize the use of one's body, all speed physical and psychological rehabilitation. The 1976 Olympiad, lasting from August 3 to 11, marks the twenty-fifth renewal of the International Stoke Mandeville Games, which take place annually in England except for every fourth year, when they move to the nation staging the Summer Olympics. The site of the competitions will be Centennial Park, a 260-acre facility in the Borough of Etobicoke, a part of Metropolitan Toronto. The park contains a stadium, two Olympic standard pools, a gymnasium, a double rink arena, and even a ski hill which will serve as a backdrop for archery, one of the first sports ever introduced to the disabled. The Olympiad will feature, among other events, swimming, track and field, shooting, weightlifting, snooker and table tennis. Many handicapped people excel at these and equally demanding sports such as horseback riding, karate and mountain climbing. In the beginning, only paraplegics competed at the Stoke Mandeville Games, but this year for the first time, blind and amputee athletes will participate. For the 1976 event, athletes will be classified by degree and type of disability and will compete in their own groups. Canada is sending a team of about eighty, composed of winners at provincial and national meets. Far from being simply another form of physical therapy, these "Wheelchair Olympics," as they are sometimes called, demand just as high a level of performance as regular international athletic competitions. All who compete in the Olympiad for the Physically Disabled represent the apex of sporting strength and skill and the spirit of optimistic dedication which so justly inspired the truth of the Olympiad motto: "Everybody Wins". This commemorative stamp features a mixed-media painting by Tom Bjarnason, internationally-known Toronto illustrator. He has chosen to portray an archer as the embodiment of skill, strength and confidence, on a background of fresh, spring green, signifying growth and hope.