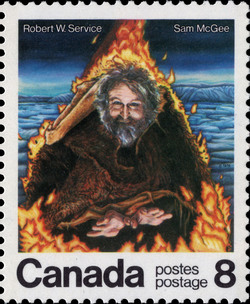 The hidden date for this stamp can be found on the right side of the stamp. Robert Service was born in England in 1874, but spent most of his childhood in Scotland. The household in which he was raised encouraged literary pursuits, and Service recalled, "To my folks anything that rhymed was poetry..." Giving in to his strong desire to roam, young Robert came to Canada in 1894 and worked for a while on the West Coast as a farmhand. After several years as a rover (he described himself as a born tramp), Service joined a bank which posted him to white horse and later to Dawson. The Whitehorse period was one of his happiest. Since he had a talent for singing and reciting, he became an amateur entertainer. When a church invited him to perform, he penned something original, "The Shooting of Dan McGrew". "McGrew" was too raucous for the church, so Service put the poem away in a drawer. However, he continued to write as a diversion and produced "The Cremation of Sam McGee" after hearing a miner's tall tale. In 1907, the poet published the drawer's by then considerable contents as "Songs of a Sourdough", and he received such acclaim that he planned another book. He conducted his research by wandering around Dawson late at night to soak up the atmosphere and by interviewing the veterans of "98". Then, having "...blasted out... rhymes with grim determination," he repeated the earlier triumph with "Ballads of a Cheechako". After leaving the Yukon, Service travelled, reported for a newspaper, served in the war, and finally settled quietly in France. He died there in 1958, while writing a poem on longevity. The stamp honouring Robert Service features an oil painting of Sam McGee by David Bierk of Peterborough, Ontario. The closing scene of the poem "The Cremation of Sam McGee" is depicted: And there sat Sam, looking cool and calm, in the heart of the furnace roar; And he wore a smile you could see a mile, and he said: "Please close that door. It's fine in here, but I greatly fear you'll let in the cold and storm - Since I left Plumtree, down in Tennessee, it's the first time I've been warm."